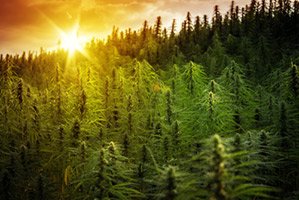 Pot stocks in 2019 will be propelled by CBD. That's an acronym for cannabidiol. It's one of the multiple chemical compounds in marijuana. THC is another one. But CBD, unlike THC, doesn't produce feelings of euphoria or being high. It eases disease symptoms, relieves pain, and can be used for wellness applications.

Many people feel that CBD is one of the best pharmaceutical products to be found in nature. And it's likely to power marijuana stocks for years to come.

You see, CBD has tremendous potential to treat numerous medical and psychological conditions. These include autism, schizophrenia, and post-traumatic stress disorder (PTSD), just to name a few.

CBD is also quickly growing in popularity as a treatment to aid general health. It relieves arthritis pain. It increases energy. It has multiple applications in treating domestic pets, like cats and dogs. (They get arthritis too.)

So as good as 2018 was for marijuana stocks, 2019 is poised to become even more of a banner year because of CBD.

Legalization Is Becoming Ever More Likely Through the United States

In December 2018, Congress passed the Farm Bill. In effect, it served to normalize CBD across the United States. In the bill, industrial hemp was made legal at the level of U.S. law. Hemp is a form of the cannabis plant. It's also a primary source of CBD.

The federal legality of hemp means that its farmers can now use banking, agricultural insurance, and U.S. grants. They couldn't use them before, for fear that their crops would be deemed illegal and subject to penalties and even prosecution.

For manufacturers and distributors of hemp, it is now completely legal to transport these products, including CBD, all over the United States, including across state boundaries. Previously, they may have been worried, again, about laws and prosecution.

Because of the Farm Bill, retail stores can now offer and sell CBD products without any fear of U.S. government enforcement actions.

The combination of increasing use by consumers and the lifting of any restrictions is going to create a market for which "booming" is an understatement.

CBD and hemp are estimated to be worth roughly $2 billion this year, according to the Brightfield Group, a research company that specializes in marijuana. By 2022, that figure will have increased more than tenfold, to $22 billion.

Money Morning Director of Cannabis Investing Research Greg Miller thinks the outlook is outstanding. He forecasts that 2019 will go down in the history books as "the year of CBD."

In the United States, Marijuana Moment followed 915 legislative bills in states and the U.S. Congress in 2018 involving marijuana, medical cannabis, and hemp. A meaningful number proceeded along the legislative track. At least 147 of them were enacted or signed in the District of Columbia and 35 states.

In 2019, state legislators and the U.S. Congress have proposed over 350 pieces of legislation related to pot.

This March, the United Nations plans to de-schedule CBD, whether it comes from cannabis or hemp plants. This will give CBD-related products more impetus about the world.

These events are catalysts. They are snowballing to end up in an unprecedented market.

As a result, CBD will be made available in an ever-growing number of products. Tinctures to place in tea and other beverages, or to take with a medicine dropper. Energy shots. Nutrition bars. Gummies. Moisturizers for the skin. CBD is likely to be infused into coffee, honey, and even beer.

As acceptance of marijuana and CBD rises, you will also be able to find the products in stores everywhere. Gone are the days when marijuana couldn't be bought legally and related products were found only in head shops.

For investors, the pot market is set to explode. In a short time, it will be mainstream. But before that happens, marijuana investors are facing a once-in-a-lifetime opportunity to profit.

The Top Marijuana Stocks to Watch in February