He’s quite the showman, and it was quite a show.

Musk even went so far as to put a mannequin in a fancy spacesuit in the drivers’ seat, next to a screen that said “DON’T PANIC!” – a cosmic inside joke for all the “Hitchhiker’s Guide to the Galaxy” fans watching.

For a couple hours, us Earthlings and other ground-dwelling types could watch the space Tesla and its spaceman passenger on a live streaming feed, up there hurtling through the heavens.

The Tesla will be up there forever, “they” say, circling the Sun, out beyond the orbit of Mars, though CNBC quoted a couple of Canadian astronomers as saying there’s a 6% chance the Tesla will crash back to Earth sometime in the next 1 million years.

Back here on Earth, Tesla Inc 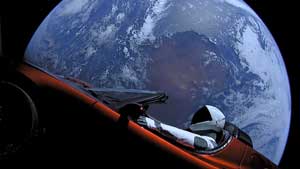 . (NASDAQ: TSLA) has done a pretty good job of defying gravity, too…

… but I don’t need to be an astronomer to predict this space rock is going to come down hard to leave a big, smoking crater in the ground.

Now, I recommended a very special, specific position for my elite Zenith Trading Circle Members – one with stratospheric profit potential.

But the impact from this catastrophic reentry is going to be so big, anyone can make some money…