From new aircraft carriers to submarines to support ships, the U.S. Navy is on a buying binge that will cost $28.9 billion a year from now until 2048.

And the best stock to buy to profit from this massive investment is the nation's No. 1 builder of U.S. Navy vessels - Huntington Ingalls Industries Inc. (NYSE: HII). Not surprisingly, this premier defense stock also sports a perfect Money Morning Stock VQScore™ of 4.75.

The company, a wholly owned subsidiary of Northrop Grumman Corp. (NYSE: NOC), which was spun off from its parent in 2011, builds or contributes to the building of almost every type of naval vessel.

In fact, Huntington Ingalls says it has built 70% of the U.S. Navy's current fleet.

The Navy would like to grow its fleet from about 287 ships now to 355 ships. To do that, the Navy has accelerated its shipbuilding plans for the next several decades, which will keep Huntington Ingalls' shipyards very busy...

The Navy's 2019 shipbuilding plan, which covers the period from 2019 through 2048, calls for increases in several fleet categories over the 2017 plan: 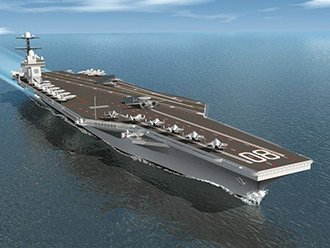 The Congressional Budget Office (CBO) estimates the expanded shipbuilding will result in annual costs of $28.9 billion - an increase in Navy outlays of $3.3 billion per year above the 2017 plan.

And Huntington Ingalls is already reaping the benefits. In January, it won a $15.2 billion contract to build two Ford-class nuclear-powered aircraft carriers - the U.S.S. Enterprise (CVN 80) and the as-yet-unnamed CVN 81 - at its Newport News, Va., facility. Huntington Ingalls is the only contractor that builds carriers.

Other Navy orders, including a $5.1 billion contract for six additional Arleigh Burke-class destroyers awarded in Sept. 2018, resulted in a $23 billion backlog as of the end of last year. Just weeks after the fourth quarter ended, the contract for the two new carriers grew that figure to $38 billion.

Also not to be overlooked is Huntington Ingalls' Technical Services division, which the company has been growing through acquisitions since 2016. This group does fleet maintenance and modernization, software development and network engineering, logistics support, and nuclear engineering and fabrication.

Technical services is another promising source of growth for HII. The division contributed 5% of operating income in 2018 versus 1% in 2016.

For investors seeking a company with a stable business, it's hard to beat Huntington Ingalls. The contracts run for multiple years, with new contracts added to meet the Navy's needs.

Even budget cutbacks seem unlikely to affect HII, as geopolitical shifts have given lawmakers a powerful incentive to build up the Navy and keep it strong...

The Challenge from China Means Steady Business for HII

While the United States spent the past 20 years preoccupied with terrorist organizations operating out of the Middle East, China has been building up its naval capabilities to exert control over areas such as the Taiwan Strait and the South China Sea.

In 2017, the Chinese Navy surpassed the U.S. Navy in numbers of ships, although the United States retains a qualitative advantage. Over the past six years, China has shifted resources from its army to its navy, which has included not just a growing number of vessels, but also anti-ship ballistic missiles.

China already has two aircraft carriers (no other country besides the United States has more than one) and is believed to want five or six. A third is currently under construction.

Emboldened Chinese leaders have even threatened the United States. In December, Rear Admiral Lou Yuan boasted about the capabilities of his nation's anti-ship missiles, suggesting that the sinking of two U.S. carriers would "resolve" the dispute over the South China Sea.

China's increasingly potent navy means the United States will have little choice but to keep building more ships or risk losing influence in the Pacific region.

That all but assures a robust business for Huntington Ingalls for decades to come - making it ideal for investors seeking stable, steady returns.

Here's the outlook by the numbers for Huntington Ingalls stock...

Why This Defense Stock Is Undervalued Right Now