5G networks will fundamentally change the way media is transmitted, which means there's an expiration date on legacy cable and broadband providers. Fortunately, it's a profit opportunity for you, too.

"5G mobile TV will force cable companies to rethink how they sell video," said Amy Yong, an analyst with Macquarie. 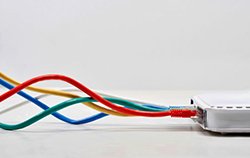 But some cable companies just aren't doing that.

Some still think 5G is just another shiny headline because they don't see the consequences of a change in the way networks are implemented and run. More than just being a "faster network," 5G will alter our infrastructure. It will profoundly affect how medical equipment is operated and push driverless cars to the mainstream.

But Comcast Corp. (NASDAQ: CMCSA) CFO Michael Cavanaugh calls 5G an "overbuild," saying, "We've faced that many times over in the past."

He's remembering the hardly-noticeable shift from 3G to 4G, which was merely a "faster" upgrade.

So either these cable companies don't know what 5G is, or they're doing their best to assure shareholders they'll stick around.

Comcast and its broadband peers don't realize they're in for a rude awakening, and investors will want to avoid their stock like the plague.

Today we want to make sure you know more about 5G than Comcast does; plus, we'll show you how you can profit from its mistake.

Why 5G Will Replace Cable

5G is the fifth generation of wireless networks (the "G" in 5G stands for "generation" ), which have evolved every decade or so since the wireless phone first appeared.
But 5G will change more about our world than all of them combined.

5G Is Coming: The Tech Breakthrough of the Century Could Rest on This $6 Stock - Get All the Details Here
Wireless customers are already used to the groundbreaking upgrades each new generation brings. The benchmark for 1G was simply wireless calling. 2G was texting. 3G was web browsing, media sharing, and essentially the foundation for what we know to be our smartphone experience. 4G set a new standard for the speed of all these functions.
5G is like having a fast, reliable wifi network wherever you are. You get a stronger signal and less lag than 4G, which means that whatever you are doing on the network, you can execute in near real time without waiting those few milliseconds for the machine to catch up.

That makes technologies like driverless cars and a fully connected Internet of Things (IoT) possible. The limited range and speed of connections right now are keeping a lid on those industries.

But what you'll notice right away is how 5G changes how you connect to the Internet.

It promises higher speeds without a wad of cables running all over the place. There will be smaller, more powerful connection points that are placed around cities and towns, so fewer towers will be needed to supply the signal. These points are called "M-Boxes." They are already installed throughout many cities, and they are what's going to usher in the $12 trillion 5G market.

The low latency of 5G will be ideal for AI and virtual reality technologies; communication with driverless cars and networked medical equipment will be more seamless. The entire Internet of Things (IoT) will erupt now that these devices can connect to the Internet from anywhere.

Of course, 5G will be faster too. 5G will be 10 times the speed of your standard cable provider, delivering 10 gigabytes per second compared to cable's 1 Gbps.

Microsoft Corp. (NASDAQ: MSFT) President Brad Smith wrote in 2018 that wired technologies take far longer to adopt than wireless, and 25 million Americans - 19 million of which are in rural communities - still don't have broadband access. With how easily it can communicate with cellular devices, 5G will get high-speed Internet to rural areas it's never been before.

As 5G completely reshapes the world's wireless connection, companies that don't - or refuse to - adapt just won't make it...

Why Comcast Is Toast in the 5G Market

One of Comcast's biggest problems its sheer size. The largest U.S. cable and home Internet service provider serves 40 states today, and no one is pleased.

A 2014 article from The Atlantic by Rebecca Rosen wonders if the company is "too big to even function."

Comcast has been the only game in town for decades, and its pricing behavior supports that. The Atlantic article cites another article from The Verge comparing the cost of the cheapest monthly Comcast cable deal in Portland ($79.99) to the same thing in Knoxville ($99.99) for 2014. And even to this day, the company is known to regularly raise prices over time arbitrarily.

But customers are forced to deal with Comcast's byzantine price structure and notoriously awful customer service because it might be their only way to access the Internet. Comcast is the only high-speed option for over 30 million Americans.

The company's take it or leave it approach to customer satisfaction is how it got ranked the "Worst Company in America" by Consumerist five years straight (2010 to 2019).

Last year, Comcast received an American Consumer Satisfaction Index score of 58 out of 100. The mean satisfaction rating for cable TV providers was 62. That number already tells an abysmal tale about the state of cable TV, and an even worse one about Comcast.

But the arrival of 5G will end Comcast's choke hold overnight.

Comcast might claim not to have its head in the sand, but it also doesn't seem to have much of a strategy for the rise of 5G. Comcast CEO Brian Roberts maintains, "There's nothing more reliable than a wire."

But the 5G threat to Comcast is very real. It's a network that can be accessed anywhere, at any time, at unprecedented speeds.

The speed of 5G alone should be enough to sink broadband providers like Comcast. But when you consider the way it's implemented, the different use cases it offers, and that Comcast is too gigantic to sense its market is being penetrated, you start to realize it's much more than a supplement. It's a revolution.

But other companies aren't so shortsighted. Here's one of the best 5G stocks to watch right now, plus an even more lucrative 5G opportunity...

The Stock to Watch in the 5G Market

In regard to the 5G revolution that is coming soon–I would like to invest in the stock market–and learn about the best 5G Stocks to invest in. Thank you very much.