There has a been a long string of catalysts for legal cannabis, but this new one could send marijuana stocks in 2019 even higher. 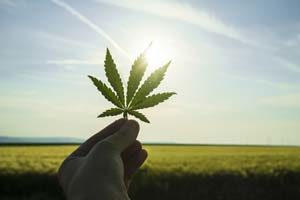 Mackey has been a long-time supporter of marijuana legalization. In 2013, he voiced his support for making cannabis legal in an interview with Mother Jones.

During the most recent interview, Mackey wasn't even prompted to speak about marijuana. An audience member asked him about stores selling "alternative proteins," such as insects. After confirming that this was possible, Mackey launched into his views on legal cannabis.

He stated that "If cannabis is ever passed in Texas, chances are good that grocery stores will be selling that too."

It also appears that Mackey is open to carrying different types of products in Whole Foods stores. When approached about this, he responded, "Let's see what happens with the market and the government regulations over time."

Understandably, journalists in the finance sector have grabbed onto these statements.

After all, if marijuana could be purchased in major grocery outlets, the potential profits would be staggering; this would also be a turning point in bringing pot into the mainstream of this country.

While this would be a windfall for weed stocks in 2019, there are a few things to consider.

According to Money Morning Director of Cannabis Investing Research Greg Miller, the likelihood of marijuana making it into grocery store chains in the short term is strong. However, the way this is going to play out may not be what everyone – including Mackey – pictures.

Look at What Happened with Liquor

It's important to remember how new legal marijuana is in this country. The first legal sale of recreational cannabis was just six years ago.

The bureaucrats and legislatures that must regulate this industry were once the same ones that were fiercely opposed to it just a few years back.

While a few have shifted their thinking about legal marijuana after learning some of the benefits of cannabis, most are a far cry from being willing to have the products sold next to cigarettes at the grocery store. And everyone knows that cigarettes are a terrible health hazard.

To be clear, consumers likely won’t see marijuana edibles sold in the candy or cookie aisle at Whole Foods.

The truth is that if Whole Foods does ever sell cannabis products, it won't be inside the retail store itself.

The more likely scenario is that Whole Foods and other grocers will open up their own cannabis dispensaries that are adjacent to its mainstream stores. This is a well-known model used for liquor stores that are connected to grocery outlets. In fact, many states have laws prohibiting the sale of liquor inside a grocery store. To get around this restriction, grocers will "connect" a liquor store to the main store and make shopping more convenient for their customers.

This could be a model for future legal cannabis retail outlets, but we're not there yet. Local and state legislatures would still need to address the legality of putting a dispensary next to a grocery store.

Even if this does become legal, the first one you'll see probably won't have a Whole Foods sign or be located in a "red" state that still hasn't legalized medical marijuana.

If you're looking for the best pot stocks in 2019, there is still a way for Whole Foods to profit from the legal cannabis market.

High Profits Are Being Made with This Compound

I feel it is still a long way before marijuana can be dispensed freely in grocery stores especially not all states have legalized even just medical marijuana. It can be difficult at the moment but if people advocating the benefits of cannabis striving to inform people, in no time the use of cannabis will be acceptable to the entirety of society.