Nothing beats a stock that pays a solid dividend and is on the verge of a share price breakout.

That's exactly the case with our top dividend stock today. 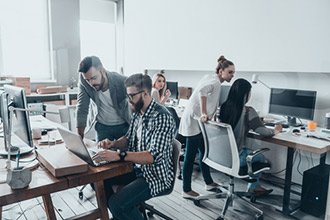 We're talking about a company that holds a No. 1 global market share in a field that has at least five major indicators pointing in its favor.

You probably wouldn't guess that it's office furniture.

It might not be the sexiest field out there. But try setting up an office without any furniture, and you'll easily see how important it is.

Office furniture is also a segment that responds to a number of different leading indicators. And here are five that are moving in an extremely bullish direction:

All this is to say that companies are hiring and building more offices, which means they need to furnish those offices.

More than that, the available workforce is shrinking. According to the Bureau of Labor Statistics, 24% of the American workforce is nearing retirement, and only 13% is represented by young new entrants.

In order to attract and retain those new entrants, 86% of CEOs told a survey by PwC that they are focused on modernizing their company's work environment.

That means lots of big orders for today's pick.

As if all of that isn't reason enough to buy, it's also been given a top score by our Money Morning Stock VQScore™ system.

That means right now is your best chance to buy your shares and lock in the dividend before the price takes off.

After 100-Plus Years, This Industry Leader Is Still a Top Innovator