Following its IPO debut last Thursday, the Pinterest stock price soared 42.1% from its opening of $19 a share. But a big price jump in just a few days after an IPO isn't why you should buy Pinterest stock.

While Pinterest Inc. (NYSE: PINS) has plenty of Wall Street investors bouncing out of their leather chairs with excitement, you should skip this tech startup "unicorn" for now.

It's only been a few days since Pinterest shares began trading publicly on the New York Stock Exchange under the symbol "PINS," but the price has skyrocketed from $19 to $27. Prior to the IPO, the company expected to raise $1.2 billion with 75 million shares. But it actually ended up earning $1.5 billion and even gave underwriters the option to purchase an additional 11.25 million shares. 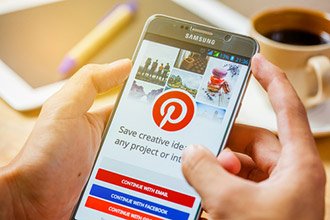 If you've been following Money Morning, you already knew the Pinterest IPO was chock full of red flags. It's competing in a highly saturated market against Amazon.com Inc. (NASDAQ: AMZN), Facebook Inc. (NASDAQ: FB), and Twitter Inc. (NYSE: TWTR). And despite all of the hype going on at Wall Street, the company is operating on a $63 million loss.

While Pinterest shows growth and potential with a 60% increase in revenue from 2016 to $756 million in 2018, it's better to approach this tech startup "unicorn" with a bit of skepticism.

Here's what you need to know about the Pinterest stock…

While that sounds eerily similar to Instagram, there are a few key differences. Instagram is all about following others and posting images of yourself and your life, whereas Pinterest focuses on users' interests.

Pinterest users are known as "pinners," and once they create an account, they answer a series of questions to help gauge the type of images they'd like to see. They're then dropped in with what looks like an endless supply of images arranged like tiles on their screen.

If a pinner likes a picture, they'll "pin" it to save to one of their collections. These collections are a series of "boards" that organize all of the pinners' saved images.

The website is more or less like a scrapbook and social media platform shoved into a blender. But instead of hashtags, character limits, and the likely extinct "pokes," users share images about things like fashion, architecture, food, and home decor.

It's a simple enough website that's easy to navigate and genuinely offers users useful information. Let's say you're into cooking and want to find new recipes. All you need to do is look up recipes, and you'll be bombarded with an endless supply of ingredients and measurements needed for just about anything you can imagine.

This can be applied to a variety of other interests, too. If you're looking for fashion tips and examples, you'll find more than enough images to help. If you're trying to decorate or paint a room, Pinterest has your back. The examples could go on for just about forever.

While Pinterest is useful, fun, and easy to navigate, it's up against some big competition. Aside from the three we listed we listed already, there are more niche ones, like Houzz, Tastemade, and Allrecipes.

And Pinterest's 265 million users sounds massive – until you compare that number to Facebook's 2.3 billion.

Luckily for Pinterest, the company hasn't had to deal with any scandals – especially like Facebook's data breach back in 2017, which is still hurting the company today.

Prior to Pinterest's IPO, the company was valued at $12 billion after receiving $1.5 billion in funds back in 2017. Post-IPO, the company is valued at around $10 billion. The firm's shareholders include Andreessen Horowitz, Fidelity Investments, Valiant Capital Management, FirstMark Capital, and Bessemer Venture Partners.

These early investors have been rewarded, too. While Pinterest stock launched at $19, the price has already jumped 31.5% in just a few days.

But it's too early to buy the hype. Retail investors should be aware of a growing list of red flags.

15536 Reads
These 3 High-Yield REITs Pay 8%, 10%, and 12% Dividends
REITs produce gobs of cash from rent and other fees generated from properties including office buildings, storage units, multifamily units, and more.