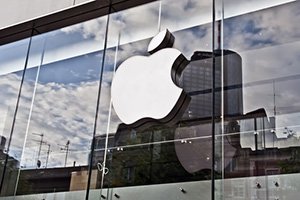 A funny thing tends to happen with investor psychology when markets hit record highs. Most investors tend to "freak out."

Do any of the underlying fundamentals really change when major indexes have surpassed previous highs? Of course not. But psychologically, there is often a big change among "the herd."

Right now, the general consensus on Wall Street is getting much more cautious.

Of course, stocks won't go up forever. But an arbitrary number like an index record is not going to be the thing that brings them down.

Only the U.S. Federal Reserve can do that with its policy on interest rates, and right now, that policy is extraordinarily hands-off.

Perhaps that's why technology analyst Gene Munster (one of Wall Street's most well-known Apple experts) recently gave Apple Inc. (NASDAQ: AAPL) a new price target of $350 per share in the next two years.

How is that possible when the company has been facing many challenges to future growth, including a slower economy in China?

For starters, Munster is bullish on 5G technology.

While Apple has been slow thus far to embrace 5G, the introduction of the new technology provides a reason for Apple users to upgrade their phones.

That upgrade cycle could be stronger than many expect over the next two years. It also puts a floor under Apple stock.

Most interestingly for Apple investors is the change Munster sees in how Apple is viewed by the market.

Specifically, Munster thinks of Apple more like a consumer staple, a company with products consumers can't live without.

These are giant companies that can withstand whatever the future brings. Plus, these two examples also have much higher valuation multiples than Apple stock.

Where is the market multiple for Apple?

So the play for Apple stock, according to Munster, is clearly a case of P/E expansion.

Even if Apple only grows at a single-digit multiple going forward, a 20 multiple or higher results in a handsome return for those buying Apple shares today.

Don't focus on the past and a lack of innovation from what was once a true innovator. Focus on the fact that consumers rely on Apply like they have never relied on the company before.

Munster goes further, suggesting that reliance results in an opportunity for the company to grow its services business.

And if you've been following along at Money Morning, you know that will be the biggest catalyst for the Apple stock price for years to come…

Why the Bullish Apple Stock Prediction Is Justified

8611 Reads
The Best Penny Stocks to Own Right Now – 185% Profit Potential
The best penny stocks to own are the highest reward for the lowest risk. And there are preferably a lot of insiders buying up shares in good faith. Then I can trust the high analyst projections - like the 185% growth target on our top penny stock today.