The Luckin Coffee IPO is on its way, and it could be a serious contender against major coffee chains. There is no official IPO date yet, but since its filing in late April, the opening Luckin Coffee stock price will start at around $16 a share.

This coffee shop chain has generated a lot of hype in the 18 months it's been running. Some are even calling it the "Starbucks of China," as it has expanded from one shop to over 2,000 in under two years. And all signs are pointing to the company surpassing Starbucks' number of stores in China by the end of the year.

But retail investors thinking about buying Luckin Coffee stock at the IPO will want to hold off for now. 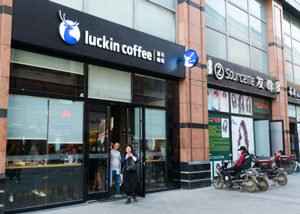 In late April the private company, Luckin Coffee Inc., filed for a U.S. IPO, offering 30 million American Depositary Shares at $15 to $17 per share. This will raise roughly $510 million for the rapidly growing Chinese coffee chain. Once public, the Luckin Coffee stock ticker will be "LK" on the Nasdaq.

But while its rapid growth and low share prices are enticing, there's a bit more going on under this company's hood.

What Is Luckin Coffee?

Founded back in October 2017, Luckin Coffee is a rapidly expanding Fujian, China-based coffee chain. The majority of its shops are small booths that offer orders for pickup or delivery. But they can be categorized into three different shop types.

In total, 91.3% of the shops are the "pickup shops" we talked about above. These have very limited seating and are generally found on university campuses or office buildings. The other two types are "relax shops" and "delivery kitchens."

In the last 18 months since its founding, Luckin Coffee has grown from a small trial store in the Beijing area to 2,370 stores in 28 different cities across China. And as of March 31, its prospectus showed 16.8 million consumers had purchased its products.

In December 2018, the company raised over $200 million in private funding. And its year-end 2018 revenue was $125.3 million – placing it as the second biggest coffee chain in China.

In 2019 the company raised another $150 million through Series B-plus funding. This puts Luckin Coffee's value at roughly $2.9 billion in the less than two years it's been around.

Beyond that, Luckin Coffee is gearing up to take the no. 1 spot in China. As of April 2019 the company entered into a joint venture with Louis Dreyfus Company B.V. and Louis Dreyfus Company Asia Pte. Ltd. These two companies process agricultural goods, and the deal will result in the construction and operation of a Chinese-based coffee roasting plant.

And there's a massive growth opportunity for coffee in China. Right now the average person in China only drinks 6.2 cups of coffee per year. That same figure for Japan is 279.

However, places like Hong Kong and Taiwan experienced a similar trend. Both have 249.5 and 209.4 cups of coffee per individual each year.

So, Luckin Coffee's fast growth and skyrocketing valuation in an untapped market show it has a ground-floor opportunity for explosive growth.

But it's facing steep competition and has a few risks of its own, including on obstacle that's keeping us from going all in on the Luckin IPO…