It's nearly inevitable that Wall Street's addiction to share buybacks will cause a stock market crash - and the 2020 election could be the spark that makes it happen.

The curbing - or banning - of stock buybacks will almost certainly be on the agenda should the Democrats win control of both houses of Congress and the White House in 2020. 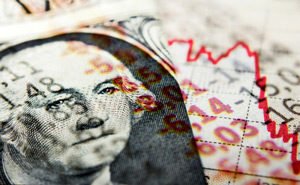 Even a mainstream Democrat like former Vice President Joe Biden - who at the moment has a huge lead in the polls over his 21 rivals - has suggested the government "take a look at regulations that promote stock buybacks."

And the topic is a favorite of well-known progressives such as Sen. Elizabeth Warren (D-MA) and Sen. Bernie Sanders (I-VT)...

But more recent proposals would go a step further...

In March, Warren, Sanders, and fellow candidate Sen. Kirsten Gillibrand (D-NY), signed on as co-sponsors of a bill called the Reward Work Act that would repeal the 1982 rule - and ban share buybacks outright.

You see, the stock market is hopelessly addicted to stock buybacks...

Each year, Goldman Sachs Group Inc. (NYSE: GS) creates a report documenting the annual net demand for stocks from every major category of investor. Net demand means the total shares sold are subtracted from the total shares purchased. The categories include corporations - the source of the buybacks - as well as pension funds, foreign investors, mutual funds, and households (you and me).

Since 2014, buybacks have accounted for a staggering 120% of net demand. In other words, without buybacks, there would have been net selling in the markets over the past five years - a recipe for a bear market if not a full-blown stock market crash. 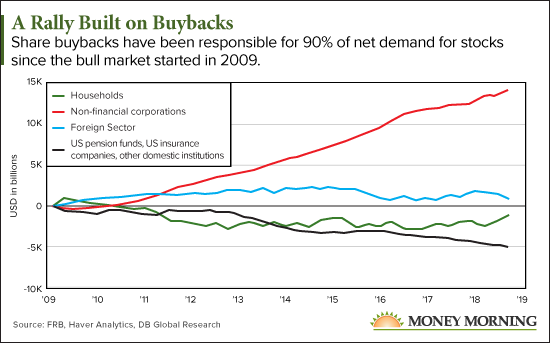 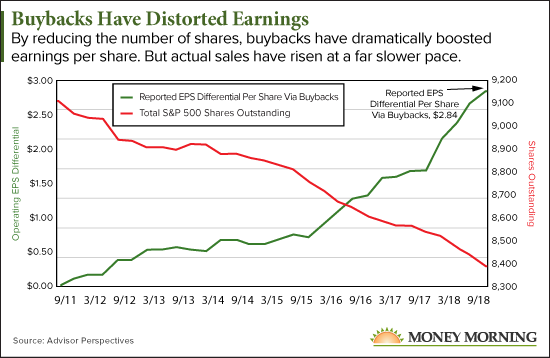 And the chances of it happening are even higher...