You're probably familiar with the blank, weathered walls of storefronts that fell victim to the "retail apocalypse." Some have been bare for years, while others are freshly scraped.

While brick-and-mortar retailers - and retail stocks - are falling out of favor, one company is turning the misfortunes of companies like Sears and Toys R Us into nationwide growth. 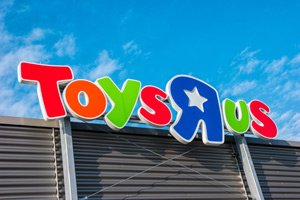 These companies aren't alone in their failures, though. Internet retailers like Amazon.com Inc. (NASDAQ: AMZN) have been taking bigger bites out of the retail industry every year, with e-commerce accounting for 14.3% of retail sales in 2018 (it was under 10% prior to 2015).

The effects have already been seen before our very eyes.

Toys R Us filed for bankruptcy in 2017, after 70 years of operation. Since then, Toys R Us has closed all 735 of its U.S. locations, and many of them are still collecting dust.

The "retail apocalypse" then set its sights on Sears. The company filed for bankruptcy in late 2018.

Sears has since desperately tried to find profitability by closing locations around the country. It announced closure of 80 stores in January 2019, adding to the 400 already closed since filing chapter 11 bankruptcy.

Several other retail store closures have taken place around this trend, announcing 2019 closures of many money-losing stores from last year. Macy's Inc. (NYSE: M) plans to close eight stores in 2019, J.C. Penney Co. Inc. (NYSE: JCP) will shoot for 27, and Bed Bath & Beyond Inc. (NASDAQ: BBBY) is looking at 40.

But the retail apocalypse is turning into a huge growth opportunity for one company.

This Stock Is Spring-Boarding off Brick-and-Mortar Closures

It's no secret that brick-and-mortar stores are getting crushed right now, but it's getting even worse. Reports by UBS Group AG (NYSE: UBS) show a 25% rise in e-commerce by 2026 and another 75,000 retail store closures in that same time frame.

That means hundreds of empty retail stores are going to be sitting unused. These are large buildings in commercial areas that aren't as easy to sell and lease as a home. After all, the retail sector is drying up, so these high-traffic storefronts just aren't in demand.

But they are perfect for one company's nationwide expansion plan.

And it's also creating a massive catalyst for its stock.

In fact, 100% of analysts give its stock a "Buy" or "Hold" rating, and we agree. The Money Morning Stock VQScore™ system gives this stock a VQScore of 3.15, meaning it's an excellent growth stock.

But here's the real reason analysts keep raising their price targets for this stock...

This Is the Stock to Buy in the Retail Apocalypse