The Dow Jones today could rise 100 points after the U.S. government eased several restrictions on Chinese tech giant Huawei – for the time being. U.S. semiconductor companies are now ticking higher.

Other DJIA impacts: Oil on the up-and-up, earnings disappointments, and an investment opportunity you don't want to miss… 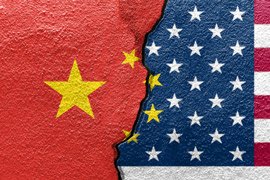 Ask yourself: If you can double, triple, or quadruple your money on a stock (in as little as 72 hours or less)… does it really matter what stock you're profiting on?

Stocks do NOT have feelings. They are NOT your friends. They do NOT define who you are.

They are vessels for making money. If you can accept this fact, you are ready for the Quantum Loop – the most inventive technology in the history of finance. Watch now.