As the Trump trade war escalates, ordinary Americans will wind up as the biggest losers.

This is something you won't hear much about in the mainstream media, which has reported mostly on the actions each nation 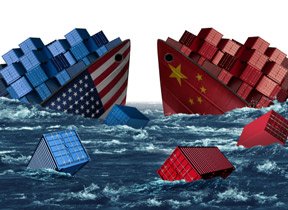 takes - and the reactions to what they're doing.

Whether you support these policies or not, families will feel the impact of the tariffs in multiple ways. Two of the biggest are through potential job losses and the rising cost of goods imported from China and other U.S. trading partners affected by the tariffs.

In addition, several studies show the cost to the overall U.S. economy running into the tens of billions of dollars.

The Tax Foundation keeps a running tally of the economic effects of the tariffs, including such categories as the impact on gross domestic product (GDP), wages, and full-time equivalent jobs.

The Tax Foundation also separately lists the impact of tariffs already in force, threatened tariffs, and retaliatory tariffs by other nations.

And as bad as they are, the Tax Foundation numbers may have underestimated the impact of the tariffs...If the escalation continues - which appears to be the path we're on - the Trump trade war will chop a total of nearly $197 billion out of the U.S. economy while wiping out more than 600,000 jobs. 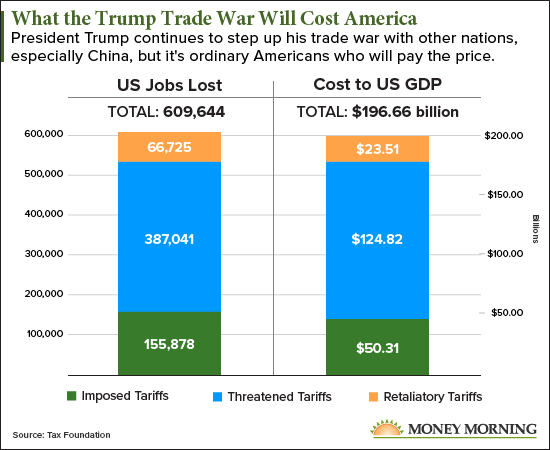 You'll Be Paying for the Trump Tariffs

The hit to the U.S. economy from the Trump tariffs also includes higher prices for U.S. consumers - despite assurances from the president that China would bear the cost.

The Federal Reserve Bank of New York estimated that the 2018 tariffs cost a typical U.S. household $414. It says the latest round of tariffs on Chinese imports will double that cost to $831 per year.

A February study by Trade Partnership Worldwide LLC paints an even uglier picture, predicting that Trump's threatened tariff of 25% on Chinese imports would jeopardize 2 million American jobs, slice GDP by a full percentage point, and cost the average family of four $2,300 a year.

And those two studies were done before President Trump proposed slapping tariffs on Mexico.

On Friday, President Trump said he would impose tariffs on Mexico in an effort to curb illegal immigration. He's threatened to impose a 5% tariff on Mexican imports on June 10, possibly increasing to 10% in July and 25% on Oct. 1.

In addition to making cars more expensive, the Mexican tariffs would threaten hundreds of thousands of American jobs dependent on the auto industry.

"U.S. trade with Mexico is all about cars. This would cripple the auto industry," Torsten Slok, PhD, the chief economist and managing director at Deutsche Bank Securities Inc., told Yahoo Finance. "It would bring car production to a halt pretty quickly."

It's obvious President Trump views tariffs as a fundamental policy tool. But it's also obvious that his broad use of tariffs will hurt working class Americans in multiple ways.

This is not what President Trump, who otherwise has presided over a strong economy, had in mind when he launched this trade war...

Why the Trump Trade War Is Failing

Throughout his campaign, President Trump complained about unfair Chinese trade policies and vowed to address them. But since he's been in the White House, China hasn't budged much - prompting the trade war.

Specifically, Trump set out to:

The problem with using tariffs as a political bludgeon is that countries are much more likely to respond with retaliatory tariffs than caving in to your demands. That's what happened in the 1930s, and that's how China has responded so far.

But President Trump is very focused on gaining those concessions from China, and so he keeps upping the ante with more tariffs. But it's well known among economists that an escalating trade war is bad for everyone - a fact I warned Money Morning readers about early in Trump's presidential campaign.

And while Americans have felt a minimal impact so far, that will change quickly if Trump follows through on his threat to place a 25% tariff on $300 billion worth of Chinese goods.

Here are the products that could soon take a bigger bite out of your budget...

Where the Trump Tariffs Will Hit Your Wallet

So we should keep paying their tax and not tax them equally in return? I didn't realize this was a CNN democratic news affiliate. Write about both sides of the argument instead of just the side you want the sheep to follow.

I want to integrate but i'm not from USA

Tariffs only hurt your own people.
Border problem was created in Washington when they cut off aid to those countries and left those poor people with nothing but war to deal with.
And when you owe somebody a bunch of money you don't throw tariffs on them ??????

How do you win a fight with your banker?
All China has to do is call in its US Treasury notes. Where is the USA then? Its affect on our economy could be worse than any military war.