The brewing antitrust crackdown on the big tech stocks may not be as bad as many investors fear – and could even prove beneficial in the long run. 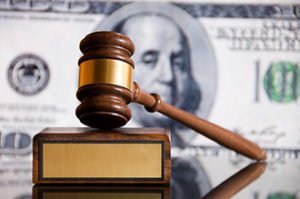 The drumbeat started in earnest in March, when Sen. Elizabeth Warren (D-MA) wrote an article on Medium outlining her plan to break up Amazon, Google, and Facebook. She argues that the companies have abused their power to stifle competition and has made breaking them up a major theme in her campaign for the 2020 Democratic presidential nomination.

In the weeks since, other prominent Democrats, including Sen. Bernie Sanders (I-VT) and the young firebrand Rep. Alexandria Ocasio-Cortez (D-NY), have endorsed breaking up big tech companies.

But things really got serious in the first days of June, when a series of news reports revealed that the Department of Justice and the Federal Trade Commission (FTC) had "divvied up" the big tech companies. The FTC is looking into Amazon and Facebook, while the DOJ is thought to be investigating Apple and Alphabet, specifically its Google subsidiary.

The news took a toll on the big tech stocks.

Although AAPL stock was only dinged by about 1% (with strong product announcements out of its WWDC conference June 3 possibly mitigating the damage), AMZN fell 4.6%, GOOGL 6.1%, and FB a painful 7.5%.

Each of the big tech stocks has recovered to varying degrees since then, but the dark cloud of antitrust sentiment continues to make Wall Street anxious about what will happen next.

In addition to the investigations by the FTC and DOJ, Congress is getting in on the act. The House Judiciary Committee has announced its own investigation into the anti-competitive practices of the big tech companies, starting with a hearing today (Tuesday) on the impact of digital platforms on the news media.

And missteps over the past year or so by all four, especially Facebook, has soured the public on big tech as well.

But despite all the anxiety, the wave of antitrust sentiment is likely to leave investors in big tech stocks better off in the long run…

Why the Big Tech Stocks Have Nothing to Fear

To get an idea of what might happen to the stocks of Amazon, Facebook, Apple and Google, we can look back at past antitrust actions.

Take one of the most famous antitrust cases of all time, the breakup of John D. Rockefeller's Standard Oil.

At the time, the antitrust mood was running high, and Standard Oil was the biggest trust of them all. When the DOJ broke up the company into 34 separate entities in July 1911, it was considered a great victory for the "trust-busters" of the era.

But if Standard Oil investors were weeping over the dissolution of the company, they had plenty of dollar bills to dry their tears. One year after the breakup, the value of the shares of the successor companies had doubled.

As the years went by, these companies merged and evolved into such oil majors as Exxon Mobil Corp. (NYSE: XOM) and Chevron Corp. (NYSE: CVX). Anyone who held on to the shares that resulted from the breakup of Standard Oil would have enjoyed huge gains.

An even more illustrative case is that of Microsoft Corp. (NASDAQ: MSFT) in the late 1990s. The DOJ went after Microsoft for abusing its dominant position in the tech world – a scenario that directly applies to the big tech companies facing antitrust scrutiny today.

Not only did it have a near-monopoly in PC operating systems with Windows, it had a near-monopoly in productivity software with Office. And in the late '90s, Microsoft used that power against the Netscape browser in an attempt to gain control of the Internet.

After five years, Judge Thomas Penfield Jackson recommended that Microsoft be broken in two (Windows was to be spun off as its own company). At the time, MSFT stock plummeted 14%.

Microsoft appealed that decision and won – it remained intact, but it didn't get away unscathed. In the 2002 settlement, Microsoft agreed to share some of its programming code with third-party developers. Years under the antitrust microscope also softened the company's aggressiveness toward competitors.

For long-term investors, the case had little impact. Although Microsoft stock stagnated for a decade afterward, that was more due to mismanagement by then-CEO Steve Ballmer, who failed to recognize and seize the opportunity presented by the smartphone revolution.

The proof that Microsoft wasn't crippled by the antitrust case had to wait for the arrival of CEO Satya Nadella in 2014. His focus on the cloud put the stock back on track. Since Nadella took over, MSFT is up 220%, and the company's market cap is now hovering near $1 trillion.

Investors who kept the faith were rewarded.

This all bodes well for shareholders of Amazon, Facebook, Apple, and Google as those companies face their own antitrust troubles.

Given that we're very early in this process, the cases against the big tech stocks could go in a number of directions.

But here's what we think shareholders can expect as this unfolds…

How the Big Tech Stocks Will Fare in an Antitrust World