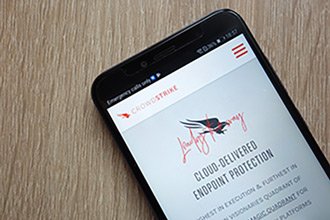 On Tuesday (June 11), CrowdStrike Holdings Inc.'s (NASDAQ: CRWD) IPO launched at $34 per share. By the time it was available for public trade on June 12, the CrowdStrike stock price skyrocketed 87%. But owning CrowdStrike stock might not be worth it for retail investors right now.

Today, we'll talk about everything you should know about the firm - and why we don't recommend being buyers just yet...

Instead, we've found a better backdoor play for retail investors to make money from CrowdStrike stock without the risks of its early IPO.

But before we get to that, here's what you need to know about CrowdStrike.

Crowdstrike is a cybersecurity company that has developed quite the reputation for itself in the industry over the last few years.

The firm was originally created back in 2012 by two former McAfee executives, George Kurtz and Dimitri Alperovitch, as well as a former FBI executive, Shawn Henry.

While it wasn't much of a household name prior to its IPO, it has been known throughout U.S. intelligence agencies for uncovering a state-sponsored Chinese spy network, Putter Panda. The Chinese spies had been tracking U.S. and EU defense, aerospace, and satellite industries.

Beyond that, the company is also known for assisting the U.S. Department of Justice to uncover and charge five Chinese hackers attempting to destroy the economic health of several U.S. companies in 2014.

However, CrowdStrike's biggest accomplishment was uncovering the two Russian intelligence groups that hacked the Democratic National Committee's IT network during 2016's U.S. presidential election. The company's findings concluded that the State Department, the Joint Chiefs of Staff, and the White House networks had been compromised.

This series of wins earned the firm FedRAMP Authorization, allowing it to work directly with the U.S. government's intelligence agencies. This means the company has lucrative contracts with the federal governments that aren't easy to get.

And that's the exact type of success that has caught Wall Street's eye now that the company has officially gone public.

What You Need to Know About the CrowdStrike IPO

All of these investors currently hold Class B shares that give them 10 votes per share. The shares available to the public are Class A shares. This means investors like you and me would have one vote per share if we were to invest today.

Originally, after filing its S-1 with Goldman Sachs Group Inc. (NYSE: GS), the firm was expected to only raise $100 million during its IPO. Instead, the company ended up raising $700 million on top of the $200 million it previously received.

This means CrowdStrike's market cap jumped from a pre-IPO valuation of $3 billion to $6.8 billion at the IPO. Once CrowdStrike stock became available to the public, that market cap rocketed to $12 billion with shares opening at $63.50 - almost double the price institutional investors paid at the IPO.

And while this sounds like the stock is a complete gold mine for investors, there are risks. This is both because of the volatile nature of IPOs but also because of the company's financials.

While CrowdStrike certainly has a lot of potential as a company, we'd like to see the firm show it can be profitable before we recommend investors buy CrowdStrike stock. This is especially true when you look at how volatile the biggest IPOs of 2019 have been.

But if you're still looking to tap into the lucrative cybersecurity industry, we've got a better play right now...

This Is a Better Play on the CrowdStrike IPO