The biggest news for gold this past month is… the price.

The price of gold has been red hot in the month of June. In fact, the precious metal is already up 6% from its May lows near $1,270 per ounce.

Less than nine months ago, markets thought the Fed was going to raise rates this year. After 10 years of a growing economy and rising markets – and rates still near zero – that made sense.

But then trade war worries took hold, and the Fed recognized the risk of a national and global economic slowdown. Now the markets expect the Fed will start cutting rates, rather than raising them. And this could possibly happen soon – and multiple times. 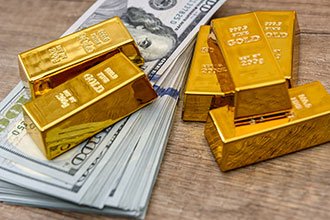 Most other central banks are already taking that route. But the specter of Fed cuts has now caused renewed weakness in the U.S. dollar and lit a fire under gold prices.

In fact, the Fed now admits that "unconventional tools" reserved for crises, like quantitative easing, zero interest rates, and even negative rates may no longer be seen as "unconventional."

With this kind of backdrop, it's little surprise the price of gold is running higher…

Conditions Are Perfect for a Gold Price Rally

The gold landscape has changed. Some might say dramatically.

Thanks to the new outlook on interest rates and concerns about recession, gold gained 6% in just the past two weeks.

The first move came on May 30. That's when U.S. President Donald Trump said the United States would hit Mexico with a 5% tariff on all goods. That's when gold got the defibrillator.

Then on May 31, gold topped $1,300 to post its highest close in over seven weeks, thanks to trade tensions.

Gold futures even tested the $1,360 level on June 14. And depending how you count or who you ask, that's the sixth time since 2016 they've hit that level.

It's widely considered that the more attempts at breaking through an overhead resistance level, the bigger and stronger the eventual breakout.

Legendary billionaire trader Paul Tudor Jones just called gold his "favorite trade for the next 12 to 24 months." Jones said that if gold can push through $1,400 – just $60 higher – then it could blast all the way to $1,700.

He thinks the increasing possibility of Fed easing could be just the catalyst the price of gold needs.

Looking at a long-term chart for gold, it's easy to see why Tudor Jones has such a lofty target. Actually, it's this kind of view that gives the clearest perspective. 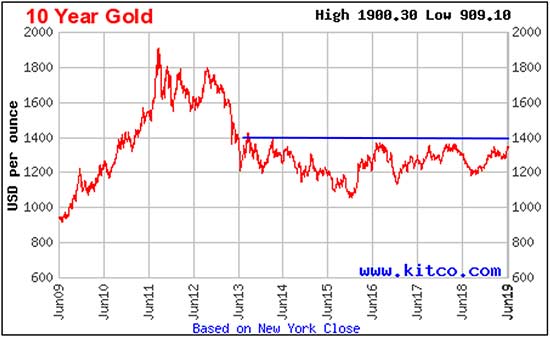 To be fair, it doesn't take an expert market technician to see the long-term resistance gold has faced near the $1,400 level. It's been a major obstacle since 2013.

And it also doesn't take much explanation to see that the next possible resistance level appears to be around $1,600.

It's looking like gold has a real shot at breaking out soon. The more times the overhead resistance level of $1,350 to $1,370 is tested, the better the chances of gold breaking through on the next attempt.

And the dollar may be about to lend a helping hand…

How reliable are GLD's holding reports? GLD does not give retail investors the right to redeem for any of its mystery physical gold holdings. This fact alone ensures the GLD shares to be nothing more than paper at the end of the day. GLD also has a glaring audit loophole in their prospectus that states they have no right to audit subcustodial gold holdings. To this day, I have not heard of a single good reason for the existence of this backdoor to the fund. Some other red flags I've stumbled upon, verified and welcome everyone else to verify for themselves:

"Did anyone try calling the GLD hotline at 866 320 4053 in search of numerical details on GLD's insurance? The prospectus vaguely states "The Custodian maintains insurance with regard to its business on such terms and conditions as it considers appropriate which does not cover the full amount of gold held in custody." When I asked about how much of the gold was insured, the representative proceeded to act as if he didn't know and said they were just the "marketing agent" for GLD. What kind of marketing agent would not know such basic information about a product they are marketing? It seems like they are deliberately hiding information from investors."

"I remember there was a highly publicized visit by CNBC's Bob Pisani to GLD's gold vault. This visit was organized by GLD's management to prove the existence of GLD's gold but the gold bar held up by Mr. Pisani had the serial number ZJ6752 which did not appear on the most recent bar list at that time. It was later discovered that this "GLD" bar was actually owned by ETF Securities."