For decades, people have wanted to get a glimpse inside the world of angel investing - it's exciting - and a little mysterious.

They're constantly seeing stories about this person or that person making an absolute fortune from some unknown startup suddenly becoming a household name, like Uber, Airbnb, Space X, or Bird scooters.

And when you look at all the money flooding into these deals - it's astounding.

It really has become a craze. 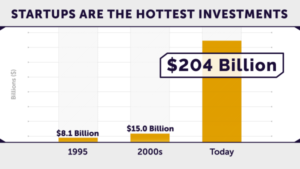 And that's just in the United States.

You start adding in Europe and Asia, and you're over $204 billion.

But even with all of this buzz, a lot of folks still aren't exactly sure what it means to be an angel investor.

Or how to become one.

We're going to talk about how much more lucrative it can be to back startups versus stocks.

And how easy it is to get started.

There are so many stories of people launching startups in their garages or basements that go on to become worth tens of billions of dollars.

He had about 20 angel investors at the beginning.

If they held on to their shares, last year they would've each made $7 billion.

Reid Hoffman started LinkedIn out of his apartment.

His startup went from being worth roughly 10 million to $26.2 billion.

Click here to learn more about getting started - and how you can unlock the incredible potential of angel investing...

Interesting ,need to know more by learning of course

good to be hear

I joined Angels & Entrepreneurs recently and have had some doubts, of course, because I have been scammed before. This helps ease some of my fears and I look forward to investing in some interesting start-ups.

Robert Herjavec and Neil Patel been talking a lot about angel investing recently, I think I would like to know more.

how do you invest ? don't you need a brokerage acct. and if so what kind .

One may invest through one of the firms that is for the purpose of start up investing, One is Republic another Wefunder, No you don't need a brokerage account. There is more risk than established but also more chance of greater gains, One should not invest more than they are prepared to loose up to 100 percent of investment, There is no definite way to sell until later development like IPO or purchased by another firm.

Unfortunately there is no way to contact Robert Herjavec or Neil Patel unless you join. What I want to know is; if this is a private market where do you sell your stocks when you are ready if the company has not gone public yet