The Dow Jones today will gain on positive sentiment around the G-20 conference.

U.S. President Donald Trump and Chinese President Xi Jinping are holding their firm positions on tariffs, but the continued diplomacy has made investors optimistic. More below.

Plus: Several banking stocks are getting a bump – and why they might be worth a look. 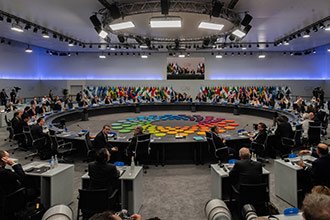