Constellation Brands Inc. (NYSE: STZ) is one of our favorite pot stocks. It took a hit as global trade tensions cast a shadow over growth prospects, but those storms passed quickly, as we predicted. 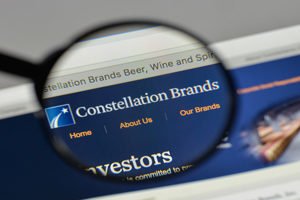 That's nothing outlandish, but it follows a pattern we've been tracking for a good while now: Constellation Brands keeps stretching Wall Street's imagination. That's because the $38 billion alcoholic beverage company isn't content with imported beer; it's branching out into the fast-growing cannabis sector, which is projected to be worth $66.3 billion by 2025.

And the results are already starting to show.

Constellation managed to deliver $2.21 earnings per share in Q1 2019, beating some estimates by 6.8%. It also posted surprise earnings in the previous quarter, beating expectations by 7.6%.

The report also shows Q1 revenue increased 2.5% year over year. The company lost significant cash flow from investing activities over the last year - namely its $4 billion Canopy Growth Corp. (NYSE: CGC), which just fired CEO Bruce Linton over a bad fourth quarter. But it also had 18% more net cash from operating activities since last year. Plus, Constellation has high rebound hopes for Canopy, and we agree.

And there's plenty of reason to believe that even Wall Street's current $233 share price target is not generous enough. Wall Street has yet to fully appreciate the growth potential of Constellation Brands.

This stock has grown 20% in the last six months, and Wall Street projects it will grow another 46% with a high target of $288. That'll register as 66% growth in the next 12 months.

Today, the stock sells at 12.71 times earnings in an industry that averages above 19.56, a sign of massive headroom for growth. So we think this is just the start for STZ, even with Canopy Growth's underperformance.

That's what made last week's headlines. But the fine print said Constellation was still optimistic about Canopy's future, as are we.

Constellation still anticipates $1 billion in annualized revenue from Canopy at the end of the current fiscal year.

And we're still approaching the biggest catalyst of all for Constellation: cannabis legalization.