Just about every investor has had the same thought at one time or another: "If only I’d bought Company X when it went public, I'd be a millionaire!"

And chances are, in most of those regrets, “Company X” is… Apple Inc. (NASDAQ: AAPL).

Not bad. But you still wouldn’t be as rich as… Mike Markkula.

It’s understandable if you’ve never heard of Markkula, but he was every bit as critical to the initial success of Apple as the “two Steves” – Steve Jobs and Steve Wozniak.

See, it was Markkula’s faith and investment in Jobs’ and Wozniak’s very early efforts that made him his enviable returns.

I’ll show you just how big those returns were in a minute.

Markkula’s savvy move is cemented in the history books now, but in 2019, it’s easier than ever for regular folks to find these kinds of opportunities.

But first, let me show you just how well he did…

The Most Successful Investor You’ve Never Heard Of 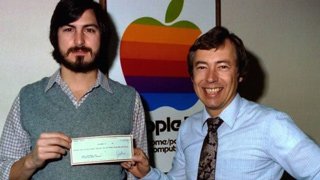 Mike Markkula was a marketing executive who had worked at such companies as Hughes Aircraft, Fairchild Semiconductor, and Intel Corp. (NASDAQ: INTC) when it was just a startup. Thanks to stock options he'd received from Fairchild and Intel, Markkula was able to retire in 1974 at the age of 32, already a millionaire.

He was referred to the "two Steves" by venture capitalist Don Valentine, who, incredibly, turned down Jobs' request for funding, describing the young Jobs as a "renegade from the human race."

But Valentine knew Markkula understood tech and had already launched an informal consulting business to keep himself occupied during his (lengthier than usual) retirement. Markkula, who had imagined the arrival of the personal computer years earlier, was intrigued.

When Jobs and Wozniak showed Markkula Wozniak's Apple II prototype, he immediately knew it would be a hit.

"I looked at it, and I said this is the first affordable useful computer for people," Markkula told WGBH Boston in a 1992 interview.

But Jobs and Wozniak had no money and no business expertise. So Markkula decided to help them write a business plan. In the process, he realized they could build a Fortune 500 company in less than five years.

The potential was overwhelming. Markkula abruptly ended his retirement and set about getting Apple organized as a company.

Another major decision Markkula made was to not bring in outside capital.

Markkula's instincts were spot on, of course. Even as former colleagues at Intel ridiculed him - they were convinced no market existed for a personal computer - he pressed on with Apple.

When Apple Computer went public, Markkula owned about 7 million shares of AAPL stock - a stake that soared in value to $203 million at the close of the very first day of trading.

That meant he enjoyed an astounding gain of 220,552% in just four years.

Compare that to the 39,500% gain for those who bought on the day of the IPO and had to wait decades to realize that gain.

Clearly, "early access" to a promising company has the potential to yield much larger gains than waiting around for an IPO. But that kind of access has traditionally been available only to venture capitalists and angel investors.

Ordinary investors have had no choice but to wait for an IPO (and hope they could buy shares).

Today, anyone can become an angel investor with as little as $50.

Angel investing used to be off-limits to the average American... but Robert Herjavec said it best during this live broadcast: "The walls have finally come down. You no longer have to be rich, famous, or powerful to become an angel investor!" Congress has now made it possible for you to take advantage of these life-changing deals.

By becoming an angel investor, you can be right there - one of the first to invest in the next Steve Jobs, the next Bill Gates, or the next Elon Musk. And because you're there at the beginning, the upside is infinitely greater. For so long, regular folks have been locked out... but not anymore.