Just 30 days ago, gold was still trading below $1,340. Today, there are many indications the price of gold is ready to soar well beyond the $1,400 mark.

What was once the ceiling for gold price is quickly becoming the floor.

Gold certainly could sense when the Fed was about to telegraph its potential return to easing through lower rates. In the first half of June, the price of gold had already moved up by $60, or 4.7%, from $1,280 to $1,340. 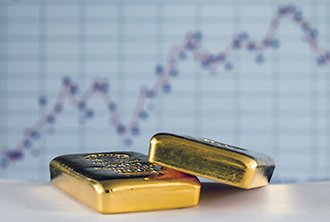 Since then, gold has re-tested the $1,400 level as traders have been taking profits.

But we've also just seen record inflows to the world's largest gold ETF, and now the futures market is pricing in a near 100% probability of a July rate cut.

Here's why investors are so sure they're going to see an interest rate cut - and why that means big strides for the price of gold today.

How the Fed Funds Rate Drives the Gold Price Rally

The Fed has been very helpful in getting the market excited about gold again.

The central bank's June statement said it would closely watch incoming information and "act as appropriate to sustain the expansion." And the market interpreted that as a 25-basis-point cut in the current target rate of 2.25% to 2.50%.

At the time of writing, the futures market projects a 96.2% likelihood the Fed will cut interest rates down to the 2% to 2.25% range.

New rate-cutting cycles have historically been supportive of a new and sustained rise in gold price. That's because the price of gold does well in a negative real rate environment.

When inflation is higher than short-term interest rates, it lowers the opportunity cost of investing in gold. Gold is more attractive.

If the Fed starts on a rate-cutting cycle, that should be rocket fuel for gold prices. And that appears to be the scenario gold is starting to price in.

It's no wonder huge amounts are starting to flow into gold investment.

When the price of gold finally broke its elusive six-year level of $1,400 on June 21, another milestone was also established. The SPDR Gold Shares (NYSE: GLD), the world's largest gold ETF, enjoyed a $1.5 billion flood-in, its largest one-day inflow ever.

So, as Europeans watch their own central bank remain dovish, they've turned to gold in a big way. This has boosted European gold ETFs to their largest share ever, now representing 47% of the world's total gold, according to the World Gold Council.

But there's more to it than that.

You see, the total amount of negative-yielding bonds has recently hit a new all-time high above $13 trillion. 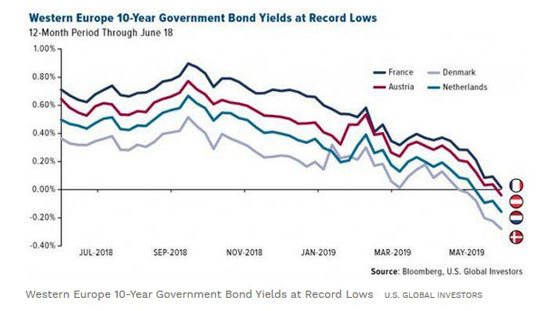 And now, in the chart from Sprott's below, you can see how the gold price tracks right along with the number of negative-yielding bonds today:

This helps explain why gold has performed so well lately. If we consider that the Fed has turned dovish recently, accommodated by central banks around the world, gold should continue to rally on this basis alone.

But there's even more to go on. Here's how recent action in the dollar affirms the gold bulls.

What the Dollar Says About Gold Price

Easily the most significant event in gold since my last update was its push back above $1,400. Actually, the importance is difficult to overstate.

The chart below says it all. See how the gold price is breaking $1,400 for the first time in six years: 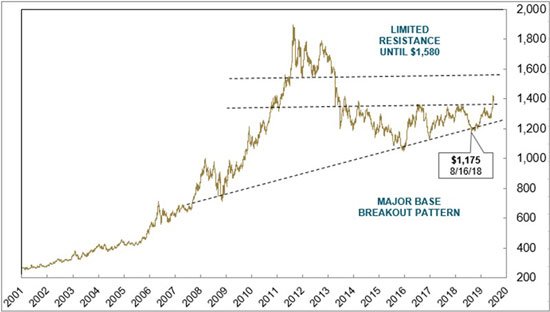 Last month I said, "It's looking like gold has a real shot at breaking out soon. The more times the overhead resistance level of $1,350 to $1,370 is tested, the better the chances of gold breaking through on the next attempt."

That $1,400 level has acted as massive overhead resistance this whole time - and it's finally cracked.

But now that gold has breached that target, I expect $1,400 is likely to become the new floor. Technically, upside resistance may not come until somewhere around the $1,580 level. But of course, gold has plenty of work to do until we get there.

In my last update, I also said the dollar may be about to lend a helping hand, referring to impending weakness that could help propel gold.

And here's what happened next. The U.S. Dollar Index (DXY) reversed at its 50-day moving average near 97.25, reaching all the way down to test 95.5 before bouncing back to its 50-day level.

You can see this action in the chart below: 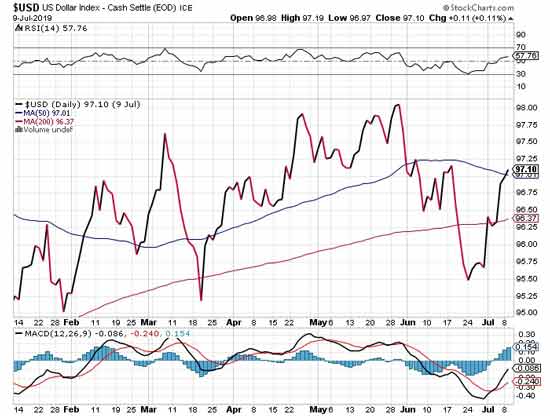 And following Fed Chair Powell's testimony to Congress on July 10, the DXY sold off, as his message pointed to more easy money.

In the next chart, you'll see the DXY peaked just above 98 in late May, and has been forming a series of lower highs since. If the DXY slips back below its 50-day moving average, its next target is the 200-day moving average around 96.35.

If that fails, then look for the DXY to reach for 95.5 or 95.25. Should this play out, that will provide considerable new support for higher gold prices. 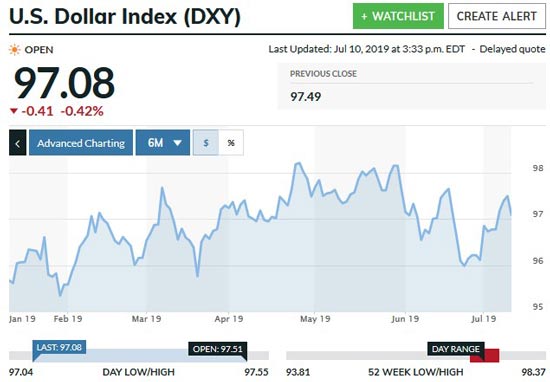 In the below chart, you'll see the VanEck Vectors Gold Miners ETF (NYSE: GDX) established a closing high of $26.17 on June 24. With its higher close at $26.20 on July 10, we have one element to help push gold stocks higher. 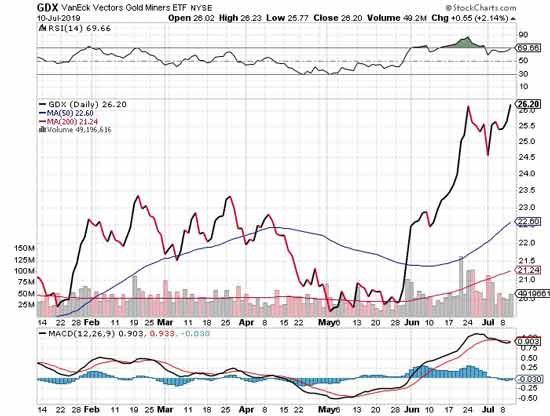 Technically, momentum is trending downward if we look at the relative strength index and moving average convergence/divergence, which are pointing to negative divergence. But both the 50-day and 200-day moving averages are trending higher, which is supportive.

Next, looking at the gold stocks to gold ratio below, we see the stocks gave back some ground relative to gold in the last two weeks of June. But since then, strength has been returning, and they've been clawing back.

June 24's reading was a nearly two-year high, so gold stocks have been very strong relative to gold itself. July 10's close established a new higher high, which is also very bullish. See the chart: 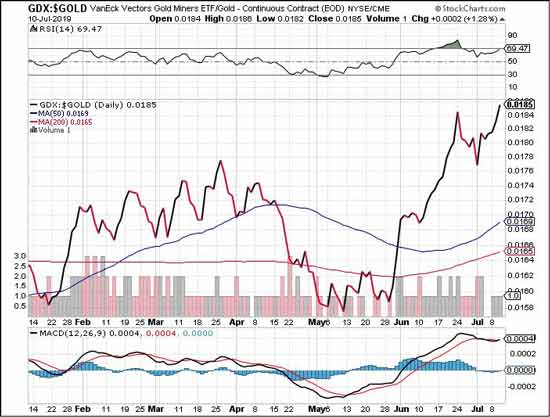 Now, here are my recommendations for gold investing - one of these has shot up 17% since January. But with gold about to skyrocket, they're even more promising down the line.