July has been yet another historic month for the longest bull market on record.

Even so, the stock market crash warning signs - whether from Wall Street, the Federal Reserve, or Congress - are impossible to ignore. 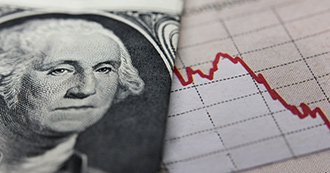 Growth on the S&P 500 and Dow indexes make it easy to believe Wall Street is safe. Many investors are still racing hand over fist to get in on the action.

But smart investors shouldn't get carried away.

Today, we're going to give you a closer look at why the probability of a stock market crash today could be higher than you think.

We'll also show you a way to prepare for the worst. In fact, you could even profit if the market turns completely south...

Earlier this week, the New York Federal Reserve's probability model, which measures recession probabilities over the next year, hit its highest level since 2009.

Clocking in at 32.9% for the month of June, the measure had ticked up a considerable 4% since May, where it sat at around 28%.

This 4% jump has put the New York Fed on edge - every time the number has broken over the 30% mark since 1960, a recession has followed shortly after.

The central bank makes these projections largely based on the difference between 10-year and 3-month treasury bond yields. This is what it calls the "yield curve."

The Federal Reserve sees it as a stock market crash warning tremor when the value of short-term bonds starts to rise above long-term yields.

But in the little data it has on recessions, the central bank knows the yield curve has inverted before each financial crisis over 60 years.

And just last month, the treasury yield curve inverted for the first time since before the 2007 financial crisis.

This means investors are buying up long-term bonds, believing future returns aren't going to be strong - that the economy may be weakening.

And the United States' bond yields aren't alone. They've been falling across the globe.

Japan, Australia, Germany, and the United Kingdom have all experienced rapidly falling bond yields over the last year.

This suggests that investors around the world are concerned that global economic growth may hit a wall.

According to government figures released this week, China - the world's second largest economy - suffered a significant blow to its economic output.

The report said China's gross domestic product dropped nearly 0.5% over the last quarter, down to its lowest level in over 27 years.

China has attributed this drop largely to pressure from the United States in their ongoing trade dispute.

According to Scott Minred - the global chief investment officer of Guggenheim Partners, one of the world's most successful investment firms - these trade war tensions could send stocks into free fall by the end of the year if they don't cool.

According to Minred, his firm's models suggest that "markets will make new lows in the summer" if trade tensions continue.

Even worse, Minred believes that markets are likely to fall below their December 2018 levels due to trade war tensions, a move that "would mark the end of the bull market that began in 2009."

And the White House isn't alone in setting the potential stage for the next stock market crash - Congress is also greasing the wheels for the nation's next economic catastrophe.

There's a new piece of legislation in danger of being derailed. If this happens, the next financial crisis will be worse than the last.

Here's what Congress is doing to start a market crash - and what you can do to stay ready and profitable in a downturn...