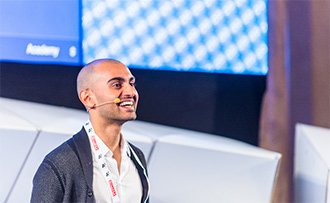 Neil Patel's life story is an American classic - the tale of a self-made millionaire.

Through a combination of insight, determination, and hard work, Neil Patel's net worth has grown from virtually zero to an estimated $30 million.

Not bad for a man who celebrated his 34th birthday in April.

But the story of how Patel pulled this off isn't just inspirational - it contains clues to how anyone can grow their wealth.

Let's find out more about this fascinating entrepreneur/angel investor...

Who Is Neil Patel?

Neil Patel was born in London in 1985 to immigrants from India. When he was still a toddler, his family moved to Orange County, Calif., taking up residence in low-income housing. His dad worked in a print shop. His mom was a teacher.

Humble beginnings, to be sure.

By the time he was 15, he'd started working at the Knott's Berry Farm amusement park -- cleaning restrooms, sweeping up garbage, and emptying trash cans.

No one who saw him then would have imagined that in just a few years, this unassuming teen would be a millionaire.

While in high school, he started to dip his toe into the entrepreneurial life by selling burned music CDs and re-selling after-market auto parts to his fellow students. He also spent time as a door-to-door salesman selling Kirby vacuums.

Patel was constantly seeking new and better ways to build wealth. And it soon became clear that he could make more money by launching his own business.

Intrigued by the Monster.com business, Patel used $5,000 he'd saved from his other ventures to start his own job search website called Advice Monkey. The business failed, but the experience introduced Patel to the lucrative field of Internet marketing.

This was just the kind of opportunity he'd been looking for.

Not long afterward, he wrangled a job as a $3,500-a-month marketing consultant for a firm called Elpac Electronics. Using that as a springboard, he launched his own Internet marketing agency, Advantage Consulting Services (ACS). He started landing clients through his connections at Elpac.

Then Patel's career really started to take off...

How Neil Patel Grew His Net Worth to $30 Million

In 2008, Patel launched another business, KissMetrics, a website analytics company. In the years that followed, he built both Crazy Egg and KissMetrics into multimillion-dollar companies.

But even that wasn't enough for this ambitious entrepreneur.

Patel decided to use some of his freshly minted fortune to become an angel investor so he could back other promising startup companies - and in the process, grow his wealth even more.

As an angel investor, he's hit more than his share of home runs.

He invested a few thousand dollars in a startup called Walk Score. It measured the value of schools, parks, restaurants, and other amenities in a neighborhood.

Before long, all the real estate apps started to include it with their home descriptions. And not long after that, Redfin bought the company. Patel received a $40,000 check and shares in Redfin, which had yet to IPO.

When he discovered a startup called Remitly - which built a smartphone app that lets people wire money directly to family members living in other countries - he invested $25,000.

But these huge wins were not just blind luck...

His secret is something he calls the "1,000x formula." In a nutshell, he looks for smart companies solving big problems for a big market. The goal is to find companies that match these criteria and thus have the potential to deliver a 1,000x return.

Of course, ordinary investors will see that and think, "That's great for Neil. But I don't have the background or the resources of an angel investor."

Because Neil Patel is now sharing the secrets of his success with investors like you.

Today, he's walking everyone through his "1,000x formula" for finding the most successful startup investments - the ones with unicorn potential.