That's not particularly unusual. A lot of folks in the Bitcoin community have been making sky-high Bitcoin predictions for years. Cybersecurity pioneer John McAfee, for instance, has for two years been calling for Bitcoin to reach $1 million by the end of 2020.

But the Bitcoin forecasts I'm talking about are coming from a group with Wall Street-level credibility - analysts, investors, and traders with experience in the universe of stocks, bonds, commodities and foreign exchange trading.

I find this notable because Bitcoin's loudest critics often dismiss those who buy Bitcoin and other cryptocurrencies as idiots who lack the investing IQ to make better choices. 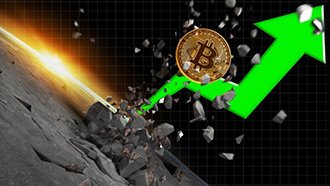 "A bunch of young inexperienced kids are going to be dumb enough to buy Bitcoin. Maybe they will. But as they get older they're going to learn better."

But that's certainly not how one would describe the Wall Street-savvy people I've recently noticed predicting a Bitcoin price of $100,000 or more.

The Cryptocurrency Everyone Else Will Regret Not Owning: To see Tom Gentile's No. 1 crypto pick and exactly how to trade it, click here now.

These financial veterans were already successful in the traditional world of investing. They didn't need to risk getting involved with something as new and unproven as Bitcoin. But each recognized the immense potential of Bitcoin and made the leap.

And given their collective knowledge of the investing world, the fact they're each forecasting a Bitcoin price of $100,000 by 2021 should make every investor sit up and take notice.

Let's look at these Bitcoin price predictions one by one...

Brandt is an unlikely Bitcoin prognosticator.

At 72, he's been a professional investor since the late 1970s. He's been CEO of his own proprietary trading firm, Factor LLC. He's written two well-received books, "Trading Commodity Futures with Classical Chart Patterns" in 1990 and "Diary of a Professional Commodity Trader" in 2011.

It was because of his charting expertise that Brandt got interested in Bitcoin. In January 2018, just one month after Bitcoin reached its all-time high, Brandt correctly predicted an 80% pullback.

This year, Brandt has been making the case for another bull run. 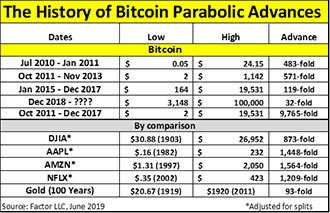 "Bitcoin takes aim at $100,000 target," Brandt tweeted on June 21. "$btcusd is experiencing its fourth parabolic phase dating back to 2010. No other market in my 45 years of trading has gone parabolic on a log chart in this manner. Bitcoin is a market like no other."

A graduate of the Massachusetts Institute of Technology, Chou founded two tech startups and worked as a trader at Goldman Sachs for four years before moving on to found LedgerX.

LedgerX is a Swap Execution Facility (SEF) and Derivatives Clearing Organization (DCO) specializing in the custody and trading of cryptocurrency derivatives. In June, the company received approval from the Commodity Futures Trading Commission to offer physically settled Bitcoin futures contracts.

As of July 17, LedgerX started offering a call option on Bitcoin that allows investors to bet on the cryptocurrency hitting $100,000 by December 2020 - a full year before most similar Bitcoin forecasts. But it appears some big players - LedgerX's institutional customers - now expect such a leap in the price of Bitcoin.

The company created Morgan Creek Digital Assets in 2018 to provide access to crypto- and blockchain-based investments to its clients. (This unit is managed by Anthony Pompliano, an outspoken Bitcoin bull known as "Pomp" on crypto Twitter. In a June 24 post, Pomp wrote in his blog that he is 70% to 75% confident Bitcoin will hit $100,000 by Dec. 31, 2021.)

Yusko made his prediction on CNBC's "Fast Money" on July 8.

The consensus we're seeing among these expert investors is striking.

But one Wall Street veteran not only expects Bitcoin to hit $100,000 within the next two years, his forecast calls for a price several multiples higher...

How High Can the Price of Bitcoin Go?