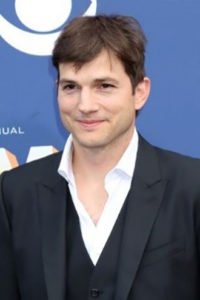 Ashton Kutcher knows first-hand about the power of angel investing.

The guy who starred in a movie called "Dude, Where's My Car?" and played the dopey Michael Kelso in "That '70s Show" is in real life an intelligent, savvy, and well-respected angel investor.

His success demonstrates just how much of an impact angel investing can have on a person's ability to build wealth - even someone with a lucrative acting career.

Kutcher, now 41, got interested in investing after discovering that rapper Curtis "50 Cent" Jackson had negotiated an equity stake in Vitaminwater parent Glaceau in exchange for an endorsement deal. When Coca-Cola Co. (NYSE: KO) bought Glaceau in 2007, 50 Cent received a $100 million windfall.

Kutcher, who had made a conventional endorsement deal with Nikon Corp. (OTCMKTS: NINOY) around the same time, had an epiphany.

"I'm like, 'Whoa, hold on, wait a second. I've got to figure out how to get in the equity game, because it just makes so much more sense,'" Kutcher told Forbes in a 2016 interview.

It was a short leap to investing in startups from there...

How Ashton Kutcher Got Hooked on Angel Investing

Kutcher joined with music manager Guy Oseary (his clients include Madonna and U2) and billionaire Ron Burkle to create A-Grade Investments, a venture capital firm that would target early-stage startups.

They looked for startups that had three characteristics:

As improbable as it seems, Kutcher was a natural at finding high-reward startups. In fact, his bets fare better on average than those of most other venture capitalists. According to Forbes, which took a look at A-Grade's books in 2016, Kutcher has generated returns of nearly 8.5x.

"If you can routinely return 3x, you're considered one of the best VCs," Andreessen told Forbes. "If you can return 5x, it's considered to be a home run. I took my math classes: 8x is seriously higher than 5x."

Kutcher's ability to identify winning startups even landed him a few guest appearances on ABC's hit show "Shark Tank," where he competed for deals with the likes of Mark Cuban and Kevin O'Leary ("Mr. Wonderful").

For sure, Kutcher has had more than his fair share of mega-hits.

Money Morning is THE authority on how to make investing profitable. Get all our stock picks, trading strategies, investing guides, and more – for free...

A-Grade Investments also made bets on such winners as Spotify Technology S.A. (NYSE: SPOT), Foursquare, and payments company Dwolla. In less than a decade, the firm has turned $30 million of investments into $250 million in assets.

You can see the impact of such proficient angel investing in Ashton Kutcher's net worth. While he was doing very well as an actor, his net worth really started to take off in 2011, after he founded A-Grade. 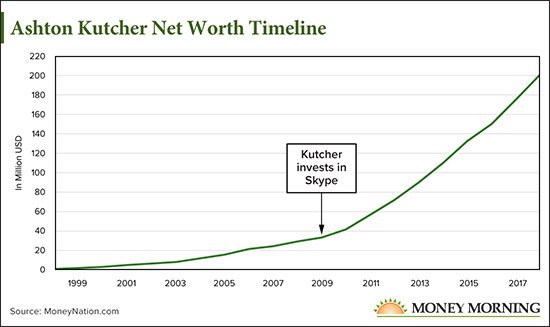 You can see Kutcher's net worth grow steadily from 1998 through 2009 as his acting career reaps the benefit of being on a hit TV sitcom as well as multiple films.

But after Kutcher starts angel investing with his 2009 stake in Skype, his net worth takes a more vertical trajectory.

There's a valuable lesson here, regardless of your income. Investing can help build net worth more quickly.

And angel investing - where you can realize massive gains by investing in companies very early before their valuation goes ballistic - can do wonders to build net worth.

It's true, angel investing used to be off limits to the average American... but Shark Tank's Robert Herjavec said it best during this broadcast: "The walls have finally come down. You no longer have to be rich, famous, or powerful to become an angel investor!"

How much does it cost to join Money Morning or to subscribe. What services are offered Compared to Angels and Entrepreneurs Network?

Thank you for your interest! It's 100% free to subscribe to Money Morning, and you can unsubscribe at any time. You can learn about who we are and sign up by clicking here. Our Frequently Asked Questions page has additional information you might find helpful. You can also review our Privacy Policy.

Finally, to learn about the Angels and Entrepreneurs Network, please contact Customer Service by clicking here. A Representative will be happy to answer any questions you have.

We hope you will join Money Morning and discover all we have to offer! Thank you for visiting!