With the price of gold finally hitting pullback mode, some pundits are calling for an end to its rally.

First, we'll show you why they're wrong. Then I'm going to share some of my favorite gold stocks to ride the coming wave.

The gold price might be in a correction phase, but it's preparing to soar over the next few years. And this ascension is coming sooner than you think. 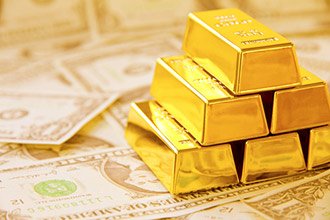 Gold is up 15% so far this year, even after its recent pullback. The S&P 500 is ahead slightly more than gold at 16% year to date.

But consider that stocks have been rising for over 10 years. And gold prices are only in a renewed bull market since 2016. For now, they're still 20% below an all-time high.

My point is that bond and equity markets are very mature, while the precious metals bull market remains in its early days.

Gold is still the ultimate insurance in a questionable global market. And it's at a discount right now, so get ready...

Why the Gold Price Is on Its Way Up

The correction over the past two weeks has relieved the price of gold from some of its overbought condition.

That was strong indication that gold was due to pull back in the near term. And that's exactly what I told you in my last update, when I said "gold could correct before it marches higher."

Gold could still lose some altitude before it resumes its climb. But there are several solid reasons gold is still closer to the beginning of a massive bull run over the next few years.

U.S. interest rates, especially in the near term, are likely to stay low. The market is currently pricing in 90% odds of a 25-point rate cut at the Fed FOMC meeting next week.

And now Trump is exerting more public pressure on the Fed, possibly even calling for negative interest rates. His reasoning is that it would help lower the nation's borrowing costs. It would also boost competition with Europe and Japan, which are already there. The takeaway here is that, with nearly $16 trillion in negative-yielding sovereign bonds, the United States could clearly follow.

And that would greatly lower the opportunity cost of holding gold.

In recent months, we've heard the likes of uber-successful fund managers, like Ray Dalio and Jeff Gundlach, explain why gold needs to be in everyone's portfolio right now. And now BlackRock, the world's largest asset manager, with $6.8 trillion under management, is just the latest in a string of high-profile fund managers calling for gold exposure.

The third major reason to hold gold right now is that central banks are buying it hand over fist. Back in 2010, we saw a sea change. As you can see in the below chart, that's when central banks became net buyers of gold. For more than a decade prior, they had been consistently large net sellers. 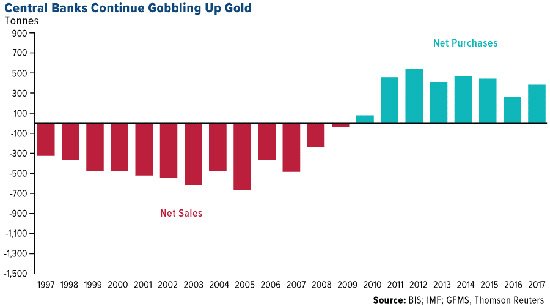 Last year, they bought the most in over 50 years, now on pace to buy even more. Who else than central banks would know better that currency debasement is coming on a huge scale?

Now, let's look at recent gold price action. Then I have a couple of gold investments for you to keep your eye on, so hang tight.

The Dollar Will Keep Weakening

The dollar has pulled back lately, probably thanks to a likely September rate cut by the Fed. But for now, the DXY remains well within its rising trend channel and above its 50-day and 200-day moving averages. See the chart: 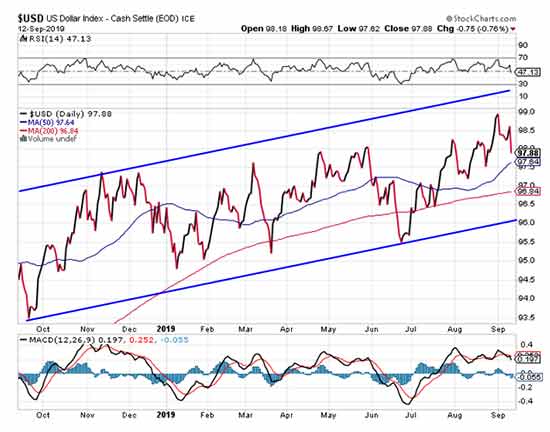 And we can see from this next chart that gold's just had its first significant pullback since May: 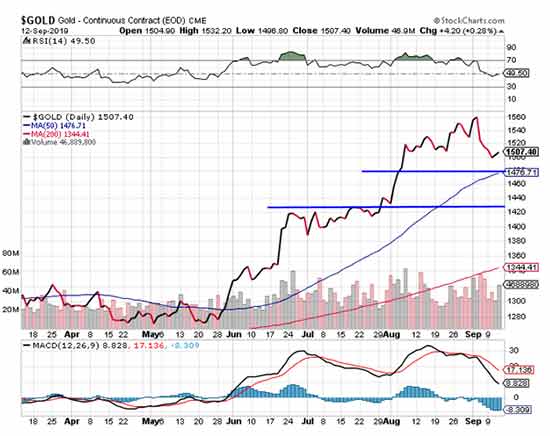 The recent action relieved overbought pressure, but it may not be done correcting.

If gold falls further, I'd expect to see the $1,475 level as the first support around the 50-day moving average. Below that, the next support appears to be near $1,425.

But now the European Central Bank has just announced it's easing rates on the deposit facility by 10 basis points to -0.50% and restarting its bond purchase program. With that news, and the Fed set to cut rates next week, $1,500 could well remain the floor.

As for gold stocks, they're back at levels last seen in mid-July, having corrected like I suggested last month.

But after some correction, you can expect a new, long-term rise. Here are my top picks for gold stocks to watch in the meantime.

These Are the Best Gold Stocks to Watch Now