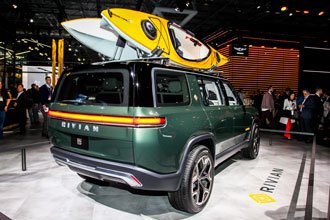 Rivian is one of the most exciting companies operating right now thanks to its potential to build a fleet of all-electric trucks, disrupting everything from the freight industry to consumer vehicles.

In fact, Amazon.com Inc. (NASDAQ: AMZN) just announced its plans to buy 100,000 electric delivery trucks from Rivian on Sept. 19. It's part of an effort to cut the company's carbon footprint.

This trend could be a lucrative opportunity for investors looking to buy electric vehicle stocks. But even with Rivian's explosive potential, you can't buy Rivian stock yet since it's not a public company.

This stock is set to double or more in the next 12 months. A major catalyst has these shares already on the move, so click here now to get the pick - it's free!

While Rivian stock will certainly be one to watch if the company ever holds an IPO, the electric vehicle industry has explosive potential. And we have another electric vehicle stock you can buy right now. We'll show you in just a moment.

The industry is getting a boost after Amazon said it aims to be carbon-neutral within the next 21 years. That's 10 years earlier than the UN Paris Agreement's goal of 2050. And Amazon won't be the only company speeding up its push towards renewable energy.

For Rivian, Amazon's order is its largest yet. Rivian is only gaining in popularity, too. On Dec. 23, 2019, the firm raised $1.3 billion in an investment round hosted by T. Rowe Price Associates Inc. (NASDAQ: TROW). This puts its 2019 fundraising total at roughly $3 billion. The company already has plans to develop all-electric trucks and SUVs for consumers by 2020 as well - with its recent showcasing of its R1T pickup and R1S SUV performing full, 360-degree “tank turns.”

But this trend goes beyond Rivian...

In fact, we have another electric vehicle stock that's developing consumer-focused electric vehicles. And our Money Morning Stock VQScore™ system just gave it its highest score.

Plus, it's making billions every quarter. And it even has a 62% upside over the next 12 months...

I think you are correct. Good article!! Thanks.