Some investors are going to make a killing from General Motors Co.'s (NYSE: GM) latest stock movement. And they don't even have to hold any stock at all.

That's because they know a few options trading basics.

Since the United Auto Workers Union began its strike on Sept. 15, General Motors stock is down 4.7%.

It's regained only a fraction of the 6% it lost since the strike began. But while GM shareholders continue to grit their teeth, options traders are getting excited. 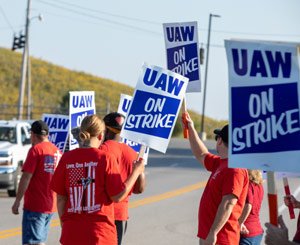 The Wall Street Journal reported on Sept. 20 (Friday) that volumes of GM options had hit their highest level in three months.

People were rushing to make options trades because a labor strike is a strong indicator the stock will see some significant movement in the near future.

The trick is knowing which direction the stock will move next.

Where GM Stock Is Headed

The initial outlook was, of course, pessimistic. The ratio of bearish to bullish options outstanding went up.

50,000 GM employees stopped working on Sept. 15, raising questions about productivity. And in response, GM said it would no longer cover healthcare costs, leaving that to the union.

That explains why the knee-jerk reaction was a surge in put option trades.

Data from Trade Alert said last week that the most-traded options contracts were put options with a strike price of $33 expiring in December. GM stockholders were seeking a kind of "insurance" for their equity.

Learn How to Trade Like the Pros: Tom Gentile just recorded all of his most potentially lucrative trading secrets in America's No. 1 Pattern Trader Cash Course. This could set you up for life – and it'll only cost you $1…

This options contract would give shareholders the right to sell the stock at $33, no matter how much lower the stock sinks in the coming months. The option holder would only have to pay the cost of the contract.

To anyone glancing at headlines in the early days of the strike, this might have seemed like the right strategy. But this was a case where the wisdom of crowds quickly split.

Just last Thursday, GM responded to the pressure from the UAW by reinstating healthcare benefits to union members. And today, news of progress between GM and the union continues to circulate.

Despite the pessimistic crowd's natural reaction to a labor strike, a fair amount of options traders expect a later climb from the stock. WSJ reported another top-selling options contract during the protests was a call option with a strike price of $42.

The holder of this options contract would have the right to buy the stock at $42, even if the stock soars way up – a nice discount for the options trader.

Now that puts and calls are both trading at high volumes, it could feel like we're back at square one. It's still uncertain which way the stock will go.

Good news: You don't have to be sure. You only have to know that GM stock will rise or fall significantly in the next few months.

And we expect it will.

Here's how you can profit whether GM stock rises or falls…

Options Trading Basics: How to Play the GM Strike