Many investors will take big losses in the coming months. But it won't be from a stock market crash. It will be from a failure to remain objective. 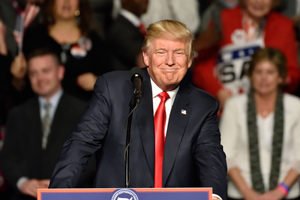 That said, the president's impeachment inquiry will have an impact. And investors can take measures to prepare themselves for anything in this uncertain market.

That starts with sticking to cold, unemotional facts.

Here's what we know about the impeachment plan, including what it'll mean for the stock market based on historical facts. Just because impeachment may not cause the next stock market crash doesn't mean it won't affect your portfolio...

What Impeachment Means for the Stock Market

First, if you're reading the signs and anticipating the worst, just know that the stock market hates uncertainty.

Investors were already uncertain about trade with China, and now they're uncertain about the possible impeachment of a president. And if you add yourself to the fold of worriers, you'll fall too.

So it's important to remember that we have things to be certain about. Here's some precedent to help us figure out what to do with our money.

You Could Be Paid $4,238: Tom Gentile's showing readers a sure-fire way they can make fast money. All it takes is a few simple mouse clicks, and you could be hundreds - even thousands - of dollars richer. See how...

In 1974, when Richard Nixon was under pressure before finally resigning his office, the economy was not very good even before his scandal broke.

The 1973 Arab oil embargo was a huge shock. Unemployment was rising, "stagflation" - the combination of a stagnant economy with inflation - was the buzzword of the day, and market leadership by the "Nifty Fifty" was gone.

In 1998, when Bill Clinton was actually impeached by the House, the global economy was still reeling from the 1997 Asian Currency Crisis. Commodity prices were also down, led by oil.

Fast forward to today, and the economy is at or near full employment, we've got no inflation whatsoever, businesses are still confident, and wages are still rising.

Think about it for a moment. The stock market set all-time highs in June and came close again in September.

That's quite a different backdrop. At the very least, it means that the economy is prepared for the worst-case scenario.

But based on precedent, the worst-case scenario is not very likely. We'll tell you why, and then we'll get into what it really means for your money.

What Exactly Is Impeachment?

The first step of impeachment is for the House of Representatives to investigate alleged "high crimes and misdemeanors" committed by the president. If it finds sufficient evidence, it votes to pass the articles of impeachment, which are formal allegations of wrongdoing.

If the vote passes by simple majority, the president is officially impeached.

Next, the Senate conducts a trial. If convicted by a vote of two-thirds majority, the president is removed from office. Neither Bill Clinton or President Andrew Johnson in 1868 were convicted by the Senate.

If you follow politics, the odds of the Republican-controlled Senate voting to convict are small. Therefore, the removal of U.S. President Donald Trump seems unlikely.

But what if it happens? Vice President Mike Pence will become president. Will policies change much? We cannot know for sure, but again, the odds seem low.

In any case, here's how you can get ahead of all the sideshow drama...

What Impeachment Could Mean for Your Money

This brings us back to uncertainty.

We don't know exactly what will happen with impeachment or with trade. However, none of it seems to be deadly for the economy in the long run.

The economy and the stock market are in pretty good shape. Interest rates are low, and for the first time ever, the United States is not at the mercy of unfriendly foreign despots for its energy supply.

No doubt, such a transition will be unsettling. Consumer demand and corporate profits may suffer in the short run. However, when the sideshow that has been politics is finally over, everyone will get back to doing what they do best: working hard and growing the economy.

Until then, it is up to us to maintain discipline with our investing, exercise good risk controls, and focus on solid companies that will flourish no matter what happens.

Live on camera, America's No. 1 Pattern Trader is showing you the secret behind some of his biggest trades to date.

Watch as he uses this special tool to collect four separate paydays in under a minute - all from enormous companies like Netflix, Apple, Facebook, even Amazon.

While it may have taken Tom years to invent this moneymaking "machine," it's super easy to understand and utilize.

All it takes is a few simple mouse clicks, and you could be hundreds, even thousands, richer.

This is an opportunity you won't want to miss out on.