When even a Bitcoin price drop of more than 22% is met with a collective shrug, you know this new asset class is truly like no other.

Last week, the Bitcoin price plunged from about $10,050 to $7,828 in just five days. And while Bitcoin owners weren't happy about it, no one was panicking. 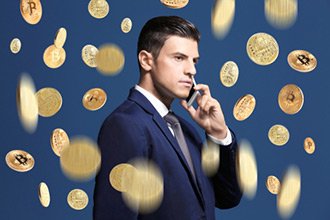 Imagine if the same thing had happened in the U.S. stock markets. A 22.1%, one-week drop would chop 6,000 points off the Dow Jones Industrial Average. The talking heads would lose their minds.

Drops like this cause panic among stock traders. The biggest two-day percentage drop in the history of the DJIA was 24.55% on Oct. 28 and 29, 1929. That most famous of market crashes launched the Great Depression.

But for Bitcoin, which has been particularly volatile of late, such a plunge fazes no one. The brief 10-year history of Bitcoin is packed with wild, often extreme price swings.

Bitcoin owners don't let these swings bother them - not even the "crashes" - because over time, the price of Bitcoin has gone up dramatically. Remarkably, Bitcoin has endured several declines in excess of 80%, but each has been followed (eventually) by a rally that takes the price many times beyond the previous all-time high.

Now It's Your Turn: Many who bought Bitcoin in 2010 are now set for life. Today, cannabis stocks offer a chance for you to build a similar fortune - if you know which ones to buy. These 3 stocks could bankroll your early retirement...

Compared to those declines, 22% is a hiccup.

This most recent plunge was also predicted by several of Bitcoin's technical analysts. Back in August, the "Markets Daily" e-letter produced by Coindesk warned repeatedly of a correction that could take the price of Bitcoin as low as $7,500.

All that said, it's important to know why Bitcoin fell 22% in such a short span.

As is often the case with these sharp price swings, I suspect there was more than one trigger.

Let's have a look at the most likely culprits...

Why the Bitcoin Price Plunged 22%

In no particular order:

Whatever the cause(s), the focus now needs to be on what comes next. Is the Bitcoin price setting up to drop further? Or will it rally from here?

I have several thoughts on this - and they may come as a surprise...