Around the globe, economic fears are rising.

Global trade is falling apart between the United States and Europe. It's already a mess between the U.S. and China. Meanwhile, international concerns about a worldwide recession have spread to every corner of the world. 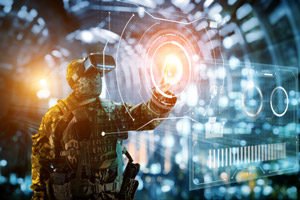 History has shown that in times of economic strife and periods of falling economic cooperation, geopolitical tensions rise. That's especially true when it comes to the threat of war and other calamities.

But the threat that stands out the most is China. Last week, China celebrated its 70th anniversary. A military parade showed off a hypersonic nuclear missile that can strike the heart of North America within 30 minutes.

The expected downturn in the market is an excellent time to think defensively. And there's a double meaning there...

You want to own stocks that can provide income and share price appreciation. You'll also want to tap into America's booming defense industry.

With hypersonic missiles now emerging at a time of rising geopolitical tensions, you only need to own one defense stock. This one will protect your nest egg and profit from booming Pentagon demand.

But before we get to that pick, let's show you how we discovered this stock - and why it's poised to break out in the coming months...

When people think about defense stocks, they might go out and purchase the first name they associate with ships, fighter jets, or military spending. This is a qualitative approach, one where investors tell a story in their mind and then use numbers to justify the story.

In reality, you want to use a quantitative approach first. You need to bring all investments down to one number. You need a number that tells you when to buy a stock, when to sell a stock, and when to hold the stock. Once you have arrived at that number, you can then use qualitative research to determine if the thesis to own the stock aligns with fundamentals.

To cut through all the noise in the markets, we use our proprietary Money Morning Stock VQScore™ system. Here's how it works...

VQScore harnesses a company's earning power and valuates whether a firm's earnings per share is accelerating or decelerating. Following this analysis, this proprietary system compares this measurement to the positive or negative momentum of the recent demand for the stock.

This robust calculation produces a score for every single stock in the universe. The score ranges from 1 to 4.9. The higher the score, the more likely the stock is to break out in the months ahead.

This week, the Money Morning Stock VQScore revealed one of the world's leading defense companies and signaled that it sits square in the "Buy Zone."

Get Defensive with Our Top Defense Stock to Buy Now