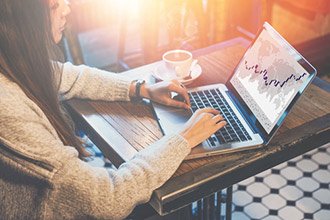 You've mastered the basics of options trading. Now it's time to make some real money.

We've got an options trading example that's delivered 64% gains for Money Morning readers. And it only took three weeks.

This example is easy to copy and could deliver gains of 50% or more every time you do it.

Plus, you'll have an opportunity to do it four times year.

This options trading strategy will put you on the fast track to building enormous wealth, quarter after quarter.

It turns out, he was understating the profit potential of this trade.

Tom was talking about the consumer review company Yelp Inc. (NYSE: YELP). Heading into its earnings call on May 10, Yelp was coming off a series of earnings beats.

You Can Double Your Money Without Buying a Single Share: Learn how you can "flip stocks" for fast profits, and dozens more trading secrets in Tom Gentile's Cash Course. Get access for $1...

In fact, Yelp's earnings per share in the previous quarter came in at $1.60, compared to a consensus estimate of just $0.05. That beat of 3,243.6% had gotten a lot of investors' attention. And Tom figured it was a good bet that Yelp stock would be on the move ahead of its next call.

This is exactly the kind of situation where an option trade is the perfect investment. An option contract gives you control over many more shares than if you owned the stock outright. So any movement in your favor is multiplied several times over.

That's exactly what happened with Yelp.

From an investor's standpoint, that's not bad. But even if you sold your shares, that 6.9% might not be worth your time.

And if you held on to the stock, you'd only watch those gains erased as Yelp's fortunes faded over the next few months.

Those who went with Tom's option play, though, fared much better.

The short-term, at-the-money call option Tom recommended was selling for $3 per share on April 9. On May 9, that same option was trading at $4.92 per share.

Note that the success of this trade has nothing to do with how Yelp's earnings report actually turned out.

Instead, Tom was trading on the anticipation of the earnings report.

It's all based on Wall Street's tendency to "buy the rumor, sell the news." In order to get ahead of Wall Street, Tom tells us to buy before the rumor and sell before the news.

How to Profit from Earnings Season: Buy Before the Rumor, Sell Before the News