Over the last decade, 11 U.S. states have completely legalized cannabis. In that time, cannabis has grown into a $10.4 billion industry. And it'll only continue to grow. That's why we're bringing you the three top cannabis penny stocks to watch in Q4 2019. 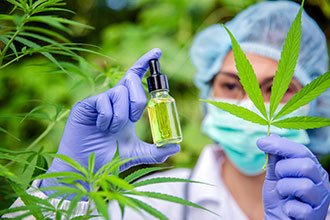 These cannabis penny stocks are focused on an exploding segment of this market - CBD.

While the legal marijuana space has already minted a new group of millionaires, the CBD market is just getting started.

CBD legalization has opened up a wealth of opportunity for cannabis stocks. And the potential is mind-boggling.

Since their IPOs, the top pot stocks on the market have seen windfalls upwards of 1,700%, 3,800%, even 5,800%. Everywhere you look, people are making a fortune off this agribusiness boom. And you can, too... Just click here to see how...

According to Brightfield Group, the CBD market is anticipated to be worth $22 billion by 2022. That's an increase of 3,623%. That's a sign that anyone who isn't all in on CBD should be.

To jump in on this buying opportunity for CBD stocks, we have a list of the three top cannabis stocks to watch now in the CBD space.

At the beginning of 2019, CV Sciences introduced its PlusCBD oil line. It was sold in more than 3,300 stores by the end of March. That represents a 48% increase in availability in just three months' time.

CV Sciences, like other firms in this space, has greatly benefited from the 2018 Farm Bill, too.

In 2018, the company's revenue was $48 million, with $10 million in profits. And in the first half of this year, it has already produced $30 million in revenue.

So, this is a CBD penny stock that is raking in profits as it continues to expand.

In September, the company announced the launch of seven new body-care CBD products like lotions and balms.

CV Sciences made two announcements in October. First, it is partnering with retailer Harris Teeter to bring its PlusCBD products to 150 locations across Maryland, Virginia, North Carolina, South Carolina, and Florida.

Second, the company announced a partnership with The Vitamin Shoppe to bring its CBD products to 515 locations across 36 U.S. states and Puerto Rico.

And these are great signs for the future growth of this CBD company.

Right now, this CBD penny stock is trading at $2.07 per share, and analysts have given it a price target of $8. This would give today's investor a potential upside of 286.47%.

Elixinol Global Ltd. (OTCMKTS: ELLXF) is a CBD company based in Australia that dabbles in marijuana edibles, supplements, and medical-grade cannabis.

This is one of the top cannabis penny stocks for several reasons.

First, it produces and distributes CBD throughout Europe, Asia, and North America.

Second, this company has had a large and successful hemp-based food business for the last decade in Australia. In fact, in that time, it has created cannabis and hemp-based foods for distribution.

And the company raised $50 million from investors this year.

But this is more than an Australian company. Elixinol has continued to expand its operations to other countries.

In February 2019, GlobeNewsWire reported Elixinol was expanded its Colorado facility by 12,000 square feet. This enabled it to produce a total of 24,000 bottles of CBD per day.

Then, in June 2019, the company funded an additional 23,000-square-foot expansion of its Colorado facility to more than double its production capacity.

This is just the beginning for Elixinol, too.

Most penny stocks aren't profitable at all, so this is certainly a CBD penny stock to watch.

This stock is currently trading at $1.00 per share, and it has an analyst upper price target of $6.06. This represents a potential 506% upside for investors that act quickly.

But our top CBD penny stock to watch now could perform even better. In fact, it could go as high as 579% over the next 12 months...