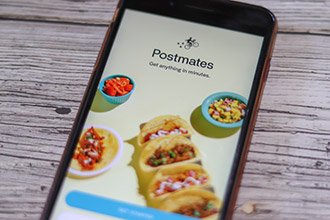 Postmates may have transformed retail delivery, but that doesn't mean you should buy Postmates stock once it goes public. Today, we'll break down whether Postmates stock will be worth your investing dollars.

We'll even show you how emerging firms like Postmates are benefitting another industry. And it's a trend that could make you a lot of money too.

But if you're interested in the Postmates IPO, you'll want to know every detail of the company before putting your hard-earned money behind it.

Learn how to spot IPOs that can actually make you money - and leave the flops to the masses - by asking five simple questions. Get our free IPO guide.

When Postmates first launched, it upset the traditional delivery industry by enabling local small businesses to deliver their products to local customers. This was a big deal since it directly challenged companies like Amazon.com Inc. (NASDAQ: AMZN) in a niche way.

Now, Postmates has become one of the most popular delivery apps, with a huge valuation of $2.4 billion. And with many investors anticipating its IPO, its valuation could grow even more once the firm goes public.

Let's take a look at what exactly Postmates is, how it got its $2.4 billion valuation, and whether it's worth a buy at its IPO date.

Why the Postmates IPO Is Getting So Much Hype

Founded in 2011, Postmates is a San Francisco--based on-demand delivery company. But it's not just any kind of delivery service - it started the United States' movement for deliveries from small businesses.

Postmates employs on-demand couriers to pick up and deliver products from a variety of businesses like restaurants, convenience stores, retail stores, and more.

Through Postmates' online app, folks can have everything from gift cards, shoes, food, and even tech products delivered to their doorstep from local stores. If a business is a partner with

Depending on the price and time of your delivery, there is also a variable percentage-based service fee based on the price of your purchases as well as a "Blitz" fee. Blitz fees only occur if you make your order during peak order times, when you need deliveries quickly.

However, if you're a Postmates Unlimited member, you don't have to pay delivery or Blitz fees.

And since its launch, Postmates' delivery service has become incredibly popular. It makes over 5 million deliveries per month. It's also expanded to 3,500 cities across all 50 U.S. states. Postmates also reported that it now works with 500,000 restaurants as well as major companies like Apple Inc. (NASDAQ: AAPL) and Walmart Inc. (NYSE: WMT).

That kind of growth has investors excited.

Celebrities have also taken an interest in Postmates. Professional basketball player Kevin Durant put a little under $1 million into Postmates. He even went as far as riding around on a bike for a day hand-delivering shoes to folks that ordered them through the app.

These investments helped propel Postmates' valuation to $2.4 billion. Once the firm goes public, it could soar even higher.

But the firm's revenue growth and valuation have some investors overlooking some major flaws.

In 2017, Postmates posted a loss of $75 million. After that, the firm only released its revenue in its 2018 financials. Now, Postmates has delayed its IPO indefinitely after several other big public offerings from unprofitable firms like WeWork completely fell through.

This suggests the company is still not close to profitability, especially because CEO Bastian Lehmann cited market choppiness as a big reason for the delay.

Postmates is also competing in a highly saturated market against companies like DoorDash and UberEats. Doordash alone is worth almost $13 billion, while Uber Technologies Inc. (NYSE: UBER) has a $46 billion market cap.

Even though these two aren't profitable either, it still has to go against the $886 billion juggernaut that is Amazon. Amazon offers everything from free same-day deliveries on some of its products to grocery deliveries from Whole Foods.

Between Postmates' 2017 losses, its delayed IPO, lack of financial information, and the series of poor IPOs we've seen recently, it's hard to get excited about Postmates stock right now.

That could also change depending on the Postmates' IPO price once it gets closer to an IPO date. There's certainly a chance it could offer enough value that it would be worth a speculative investment.

In the meantime, we have an even better investment that could help you safely capitalize on unicorn companies like Postmates that rely on information technology.