There's plenty of resistance facing the price of gold.

But we're entering what's typically the strongest season of the year for gold stocks. And we fully expect the price of gold to rise soon, just after a little more near-term correction. 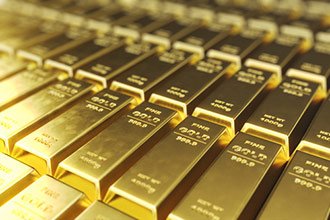 A slow unwinding of the U.S.-China trade war, new stock market highs, and a normalizing yield curve could all have negative impact on gold prices. But something gold investors need to consider is that this is all short-term action.

With bonds selling off and offering higher yields, gold might appear to be struggling. But if you look closely, you'll see the gold price has posted increasingly higher lows over time.

In fact, gold is already up an astounding $243 per ounce, or 20% in the past year. That's despite a soaring dollar and roaring stock market.

This isn't to give gold investors a false sense of optimism, but stay realistic. Don't buy the sensational headlines that immediately follow a spike in broad market averages.

As always, gold investors should remain data-driven. Look closely at federal and global activity influencing the price of gold over the medium or long term.

After all, the big picture hasn't changed. All major central banks are in easy-money mode. And there is deeper data suggesting the gold sector is actually holding up well.

Here's why it might be coming time to wake up the gold bulls...

How the Fed Moved Gold Price

On Oct. 30, the Fed cut rates as everyone expected, but the Fed's statement that followed sounded hawkish. Some investors believed the Fed would look to future rate cuts only on an as-needed basis. This put pressure on gold prices.

The market saw this as a pause on further accommodation. U.S. Federal Reserve Chair Jerome Powell commented during the ensuing press conference that unless the Fed's outlook changed materially, the current policy remained appropriate.

But then, Powell said he was not ready to start raising rates either. "We would need to see a significant move up in inflation before we could consider raising rates," Powell said.

But even after peaking around $1,514 a few days later, gold eventually dropped below the $1,480 support level a week ago, as the markets returned to a risk-on stance.

According to the CME's FedWatch Tool, the market is currently pricing in a 97% probability that the Fed will not change its current target rate of 1.50% to 1.75%.

In my view, gold is simply working off the overbought condition it reached by early September.

And that means gold prices could start rising again soon...

Why Gold Can Rise with the Dollar

Despite a rate cut by the Fed, the dollar's been gaining since then, as you can see in the chart below. That's actually a bullish sign for gold. 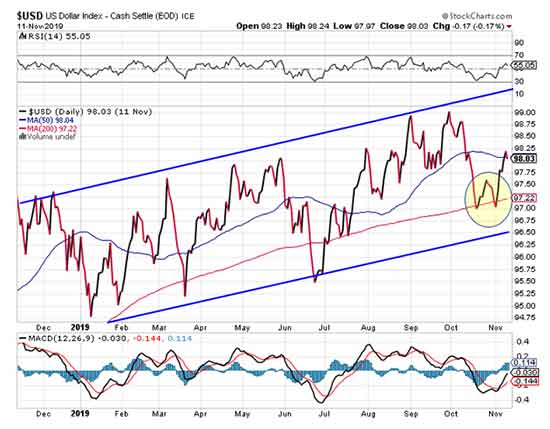 Many investors remain confused about how and why the dollar can maintain such relative strength in the face of lower rates and renewed Fed easing. Consider that the Fed boosted its emergency overnight repo purchases from $75 billion to at least $120 billion. All of this was an effort to maintain tight control over very short-term lending rates.

And yet, Powell said with a straight face, "This is not QE. In no sense is this QE."

That helps ensure the yield curve maintains a more "normal" shape, while allowing the U.S. Treasury to boost borrowing through cheap short-term lending.

In effect, I believe the dollar is and can remain strong relative to most other major currencies because of interest rate differentials. The European and Japanese Central Banks have negative deposit rates, on top of quantitative easing. Owning 10-year U.S. Treasuries provides about 175 basis points higher return. So the demand for dollars remains strong, supporting the greenback along the way.

But, as I've said multiple times before, gold can rise along with the dollar. And in the past year, that's certainly been the case.

As for gold itself, my sense is that it has yet to finish correcting. We can see that the 50-day moving average has turned downward, and it's making lower highs as well as lower lows. This downward momentum is being confirmed by the relative strength index (RSI) and moving average convergence divergence (MACD) indicators. See the chart here: 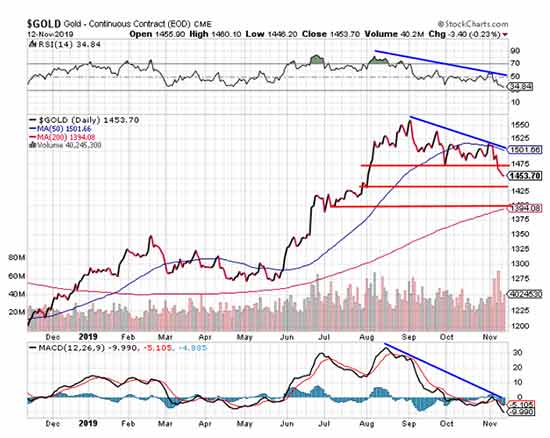 Meanwhile, an encouraging sign is coming from gold stocks. Despite new lows in gold, VanEck Vectors Gold Miners ETF (NYSEArca: GDX) has bounced from the $26 level each time that was tested. If that should break, then I'd look for $24.50 as the next target. 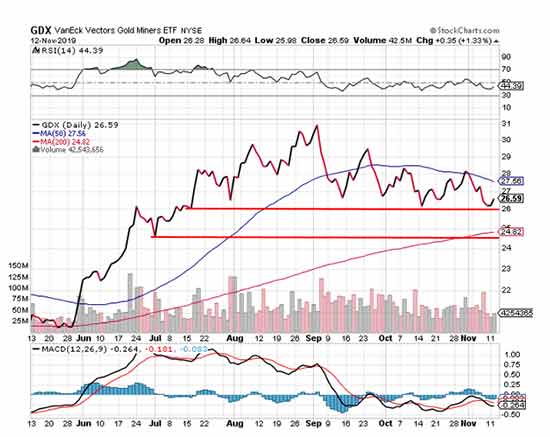 But here's an interesting look at the ratio between gold stocks and gold. Basically, it tells us how the stocks are doing versus the metal.

In the chart below, you'll see that while it's been forming lower highs, it's also been putting in higher lows. If this ratio breaks out of the narrowing wedge to the upside, it could signal that gold stocks are leading gold. And if it does this with GDX heading higher, it may signal the end of gold's correction. So this, along with GDX, will be worth tracking closely. 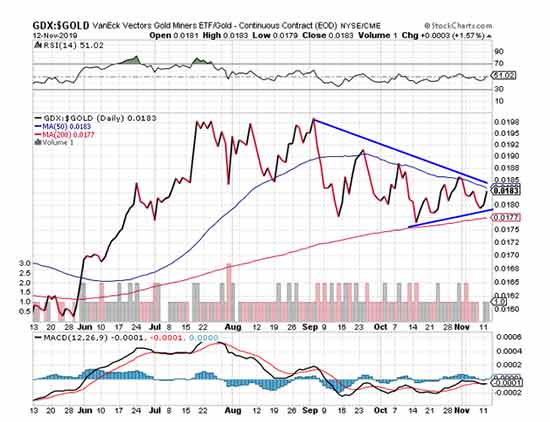 These are the gold stocks to buy once the price of gold finds a bottom.

The Best Gold Stocks to Buy

You were correct about gold going up.