The price of silver might not be finished correcting yet, but it will be soon. And when it does, silver prices in 2020 could smash a three-year high and challenge its five-year top...

Ever since silver peaked around $19.50 in early September, investors have wondered how much consolidation lies ahead. 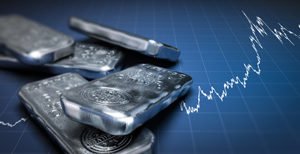 In my silver update last month, I suggested that silver could see more correcting or consolidating. And that's what happened.

Silver's been forming a series of lower highs and lower lows, a typical downtrend technical pattern.

But with the Fed's newly expanding balance sheet, stocks have soared to new record highs. The 10-year Treasury bond hit a clear bottom the same day gold and silver peaked.

We've been back to a risk-on stance as the White House hints at progress towards a U.S.-China trade deal.

Despite this, some silver indicators are suggesting there may not be much downside left. Here's what you need to know.

Why the Price of Silver Could Soon Rise

But that doesn't change the fact that the precious metal is up 17.2% since late May. And the latest developments in U.S.-China trade could push the price of silver even higher.

In late October, the silver price moved 3% in a single day as industrial demand was looking bright in the context of a possible U.S.-China trade deal.

Ryan McKay, commodity strategist at TD Securities, said that talks of a phase one deal have made the industrial metals market look "more optimistic." Specifically, he said investors have been "under-positioned in silver and near maxed positioning in gold."

This means it's likely that as industrial metals investment grows, it will mostly go into silver rather than gold.

A few days earlier, billionaire precious metals advocate Eric Sprott said precious metals prices at current levels are gaining acceptance, and the sector could be in for more surprises.

According to Sprott, there could soon be a "shortage of silver," pointing to the amount of silver going into ETFs and India.

He's referring to how silver recently reached all-time highs in the Indian rupee. Indians were expected to pile into silver for gifts during the Diwali Festival Season, as silver imports were up 72% year over year.

As you can see below, India represents a significant portion of the global silver demand. 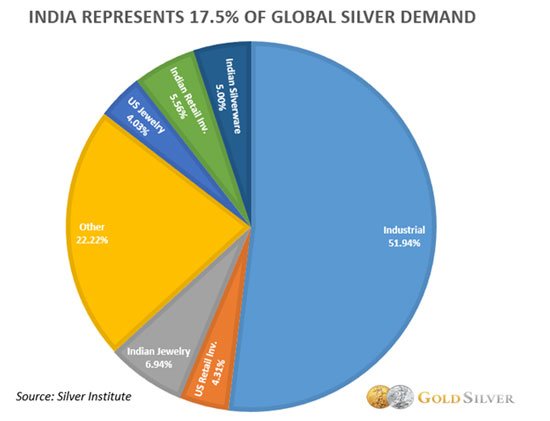 At 1.34 billion and a massive affinity to precious metals, if Indians keep growing their demand for silver, shortages will come fast and furious.

That's going to come at just the right time too, because the technical indicators are showing silver prices are ready to pop.

The charts I'm looking at show the price of silver could breeze past its three-year high and challenge its five-year high.

What the Charts Say About Silver Prices

It’s a loser investment at best. You will not make anything off silver unless it jumps to the price of gold which it never will. Buyer beware.

Will
Reply to  Stan Armstrong

So, it comes out of the ground, at a ratio of circa 8.5:1 (Silver:Gold) ratio and Gold is retained, while MUCH of Silver is used, in industry.
It is used in such TINY quantities that it would be uneconomical to recover, and because of that, it has largely gone to landfill, where future archaeologists, will find it.

BUT as a currency/money it is highly valued.

The mining rate has gone down as the metal has reduced in ratio, the further into the soil/rock.

The mining ratio has fallen over the last 100 + years and according to the U.S. Geological Survey reports, will disappear from the soil, with FEW new sources.

IF/When that happens, prices of existing supplies will ROCKET, and PM has upto 800million ounces according to Ted Butler of Butler Research.