With 2020 around the corner, it's time for lists of the best stocks of the last year to flood your inbox. To us, however, the future looks a lot more profitable.

So we're sharing the best stocks to buy for the next decade.

These aren't your run of the mill stocks either. These companies are plugged into some of the biggest trends powering markets higher. 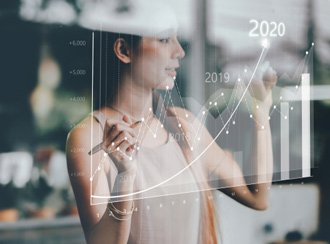 Cannabis stocks could explode over the next few years. Public perceptions of cannabis are changing, and 11 states could also vote on legalizing medical and recreational pot in 2020. (You'll find more on that here.)

But that's just one of several industrial revolutions in the works. Other budding markets include 5G, cloud computing, cybersecurity, AI, and machine learning. And that's in response to all kinds of demand for innovation - in clean energy, medical technology, and national security.

The 5G rollout will be running at full throttle, a piece of a greater puzzle involving AI, the cloud, transportation, medicine, entertainment, and much more.

Some of our best stocks for the 2020s might be new names, and some are familiar faces taking a new direction. Either way, they're going to make a splash in the next decade.

The best stock for next decade is a familiar one, but what it's doing might surprise you. In fact, you may find it's the best thing for your portfolio since compound interest.

This marijuana stock isn't so bad either...

Best Stocks for the Next Decade, No. 5: Cresco Labs

Cresco Labs Inc. (OTCMKTS: CRLBF) is one of the largest cannabis companies in America. Greg Miller, Executive Director at the National Institute for Cannabis Investors, has said it might be the Starbucks Corp. (NASDAQ: SBUX) of weed.

And it could really be one of the biggest potential winners of the cannabis legalization wave sweeping the nation.

As several states vote for legalization next year, either for medical or recreational purposes, there's a chance every state will have legalized marijuana in some form by the end of 2020.

The two most likely cannabis states are Arizona and Florida. Their petitions for legalization are set to appear on the ballot. And both of these show a high demand for recreational cannabis from voters.

Cresco has a stake in both ballot measures. It acquired Arizona Facilities Supply LLC last year, gaining 170,000 medical marijuana patients. It nearly merged with a Florida line of dispensaries, VidaCann, this year, but the merger was canceled.

Nonetheless, the company still has interest in the Florida market. According to CEO Charlie Bachtell, entering Florida is an "important milestone" for the company to pursue.

Sixty-four percent of Floridian voters support legalizing recreational marijuana. And the state adds the second most medical marijuana patients per day, on average, behind Oklahoma.

For now, losing the VidaCann deal actually worked well in Cresco's favor. It saved $120 million. Around the same time, it also sold off properties in Ohio and Michigan for $38 million.

That bumped its bottom line up $158 million, which is in line with the goals of the management. CEO Batchell has said he wants to build the "most important, enduring company in U.S. cannabis."

This company is based in Chicago, but it's been spreading in sync with the legalization wave. It currently owns California's largest cannabis distributor, Origin House, as well as some dispensaries in Nevada and other states.

Shares of Cresco currently trade for $6. But some Wall Street analysts give it a target of $18.13. That's a 202% rise in 12 months, but if Cresco continues pursuing acquisitions and maintaining its balance sheet the way it has, this is one to hold for years to come.

If you're really interested in cannabis investing, you'll find loads of information at the National Institute for Cannabis Investors to get you started.

Artificial intelligence could be an even more explosive sector...

Best Stocks for the Next Decade, No. 4: Splunk Inc.

This company designs cloud AI solutions for cybersecurity, Internet of Things, business analytics, and other information technology operations. That means it's capitalizing on almost every technology trend in the coming years.

Businesses and individuals everywhere are moving to the cloud. According to a survey by LogicMonitor, 95% of enterprise workloads will have made their way into the cloud by 2020.

This company has worked alongside Google in 2016, strengthening Google's cloud service by integrating its services with it. Splunk also delivered Splunk Insights to help launch Amazon Web Services.

Several other partnerships and acquisitions, combined with organic growth, have made Splunk one of the top analytics firms in the world. Money Morning Defense and Tech Specialist Michael Robinson calls it a "profit machine."

Splunk was profitable only six years after it was started. Forbes named it one of the world's top growth firms in 2018.

The company has seen average annual gains of 112% in per-share earnings in the last three years.

But it's poised for an even bigger 2020 decade. This tech stock trades for $145.90 right now, but the current 69% growth targets are likely on the conservative side, with what we expect from the tech industry through the next few years.

Best Stocks for the Next Decade, No. 3: Apple Inc.

Apple Inc. (NASDAQ: AAPL) has been one of the most coveted stocks on the market for decades. Because it's now on the pricey side, investors often speculate exactly when is best to get in.

The common wisdom is to buy on dips with big blue chips like this. But Apple stock is a special case - in fact, there might be no better time to buy it than now.

Money Morning Chief Investment Strategist Keith Fitz-Gerald says Apple is about to enter the "single most lucrative market in the world" when it takes on healthcare. You'll find more of what Keith has to say about that right here.

There have been talks about Apple entering the healthcare field. Morgan Stanley (NYSE: MS) explored Apple's healthcare prospects earlier this year. It found that healthcare could add $15 billion to $313 billion to Apple's revenue annually.

Apple already brought in $260.17 billion in the 2019 fiscal year. Morgan Stanley estimates the revenue from the medical venture could amount to an additional 35% - or about $90 billion.

As you can see, Morgan Stanley is playing it safe with that estimate. Ninety billion dollars is not even the midpoint in that $15 billion to $313 billion interval it provided.

This could happen even faster once Wall Street catches on and starts building hype. Technology and medicine are going to merge over the next few years, with technology like AI and 5G allowing faster data processing and advanced analytics to streamline healthcare. And Apple is right on top of this trend.

Best Stocks for the Next Decade, No. 2: Roku Inc.

Another huge shift we'll see very soon is a change in how people consume media. Television is on its way out, to be replaced by streaming. People are only going to pay for the content they want to see, on demand.

This has shown no signs of slowing down, as giant companies have entered what's now called a "streaming war" to see who could earn the most subscriptions with the most quality content.

The streaming war has built a lot of hype over the last few months. Pundits have argued over who will "win" between Apple, Netflix Inc. (NASDAQ: NFLX), Amazon.com Inc. (NASDAQ: AMZN), Walt Disney Co. (NYSE: DIS), and others.

That's because, for this company, it's no contest at all. Roku is what's called an over-the-top (OTT) media provider. This streaming stock allows users to stream video from anywhere - including any of the streaming services above in addition to the web.

For instance, when Apple entered the streaming market, Roku stock shot up 4.7% immediately.

Roku leads the pack, but its market share will only expand as the streaming war heats up.

What makes Roku unique is that its content is supported by ads. That means users can access the content they want at less cost than its rivals. The Roku device is also significantly cheaper than its counterparts, starting at $29.99 compared to Apple TV's $149.

And its strategy works for the bottom line. The year after Roku launched its advertising platform in 2017, profits went up 66%. Revenue grew by 45% in 2018 - and revenue from platform sales alone grew 85%.

This not only pointed to Roku's success, but a broader cord-cutting movement.

Roku shares currently trade for $139.57, with some analysts targeting $200 over the next 12 months. That's solid 43% growth, but at the rate the streaming industry is growing, this could easily be a low estimate.

We've covered a lot of different sectors here. But this next one isn't like the others. It's not an emergent sector, but rather a new spin on a sector that's been around for thousands of years.

One innovation could make this the best place to invest in 2020 and through the decade...

Best Stocks for the Next Decade, No. 1

Good blog post. I want to thank you for interesting and helpful information and I like your point of view. Thank you!- I love to read this type of material Good and attractive information I take from it.. Thank you for posting such a good article.