Gold investors are getting frustrated as the price of gold continues to drift sideways. But the gold price has already gained 17% in the last 12 months, and 2020 promises to be a breakout year as central banks around the world buy up gold. 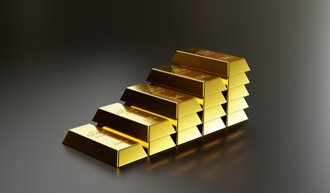 With central banks buying more gold than ever and many repatriating their gold stored offshore, demand remains strong.

Combine that with ongoing record global debt levels, and it's easy to see why. Since 2008, central banks have printed $22 trillion worth of new credit.

Even U.S. Federal Reserve Chair Jerome Powell recently told lawmakers that the swelling federal debt could impede Congress' ability to support the economy in the next recession.

And I'll show you two of the best ways to capture these gains right now...

How Central Banks Are Moving the Gold Price

The way things are going, the New York Fed and the Bank of England are going to have a lot of extra room in their vaults.

The Bank of England gold vault is the second largest repository of gold. Last year, it held 20% of the world's gold, or some 5,659 tons. Most of that was England's own, plus gold from over 30 other countries for safekeeping.

The U.S. Federal Reserve Bank of New York boasts the world's largest gold deposit, with about one-quarter of the world's gold. Here, too, gold from dozens of countries is held for safekeeping.

But that's been changing over the past several years. The most recent high-profile case is that of Poland. The country's central bank bought about 126 additional tons of gold in the last two years.

But last month, the Poles decided their $5 billion of gold stashed in London was better stored at home. It took eight planes to fly all 100 metric tons to Warsaw at night.

Since then, Slovakia's Prime Minister, Robert Fico, told his parliament to repatriate its gold from Britain. Talking to reporters, and referring to Britain, he said, "I guarantee that if something happens, we won't see a single gram of this gold. Let's do it as quickly as possible." Concerns around Brexit have stoked fears.

According to Holland's central bank, gold buying is on a roll. It said that in the case of a global financial reset, the "gold stock can serve as a basis" to remake the world's monetary system. It reasons, "Gold bolsters confidence in the stability of the central bank's balance sheet and creates a sense of security."

And central banks have not let up on their gold buying spree, gobbling up about 20% of global gold mine output. October's official gold purchases have pushed 2019's buying to 550 tons, a full 17 tons higher than in all of 2018, which itself was the most in 50 years. Central banks are on pace to be net gold buyers for the 10th consecutive year. 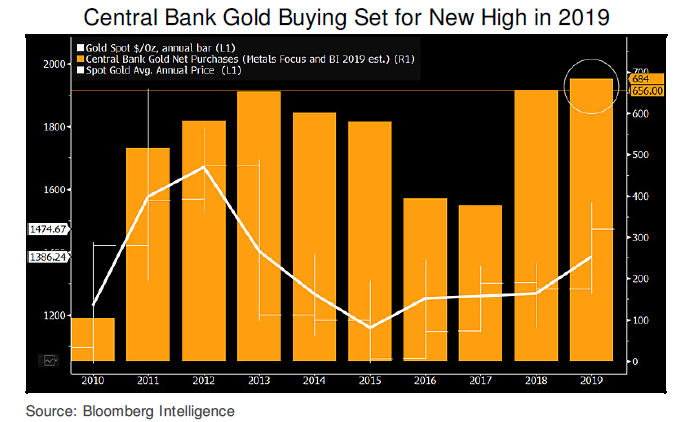 Meanwhile, the rich are building their own physical hoards of gold too. Goldman Sachs thinks the price of gold could reach $1,600 by next March, and pointed out owning physical gold is gaining popularity.

It also highlights that this supports reports that demand for vaults is surging. The below chart suggests exactly this, as gold in storage has grown more quickly than gold ETFs, etc. 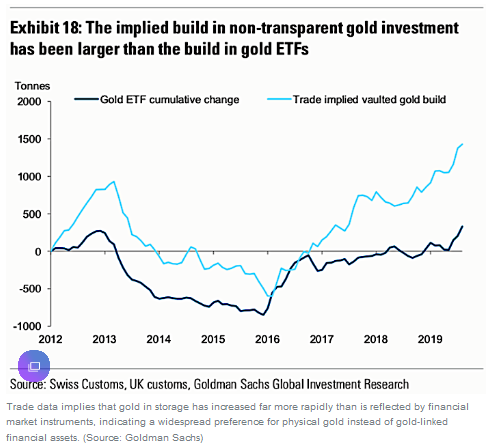 In a recent interview with Kitco News, Ryan Giannotto, Director of Research for GraniteShares ETFs, said, "We have found that the efficient [portfolio] level, the optimized level, was 35% gold." While he acknowledges this is a high amount, it "challenges the conventional wisdom of what pertains to gold and how to use it."

And that's why gold investors are getting excited for the coming year...

What to Expect in the Price of Gold Now

As for the outlook, Commerzbank thinks "ultra-loose" money policies will help push gold back to $1,550 in 2020. It even sees another Fed rate cut in Q2 next year, while the Fed's been buying $60 billion of short-term T-bills since mid-October, and the ECB and Bank of Japan also keep buying bonds.

Goldman Sachs says the strategic case for gold remains strong, calling for a $1,600 gold price next year. It argues that long bonds from developed economies may have peaked (think negative yields), emerging market wealth is growing, mine supply growth is minimal, political risks remain elevated, and there's added concern about currency debasement with the growing popularity of Modern Monetary Theory.

You Can Make a Killing in the "VIP" Market: The open market can only do so much - the real wealth is built in the private sector. Now you can tap into life-changing windfalls before they potentially go public. Click here to see how...

From a technical perspective, gold prices may be improving.

Last month, I said that the price of gold could bottom in the $1,400-$1,425 range after having dropped to the $1,450 level. That's still possible. But since then, it has been forming a series of higher lows and higher highs. As you can see in the chart below, the gold price remains under its 50-day moving average of $1,483. If it can close above that level, we may be back into a new rally that could take it up to $1,515. 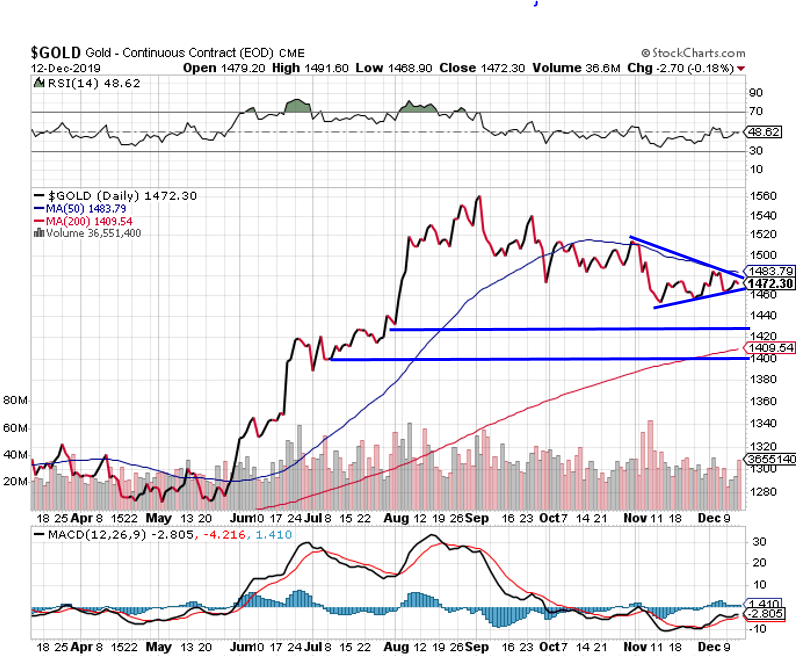 As for gold stocks, they are back above their 50-day moving average, with GDX putting in a triple bottom near $26 so far: 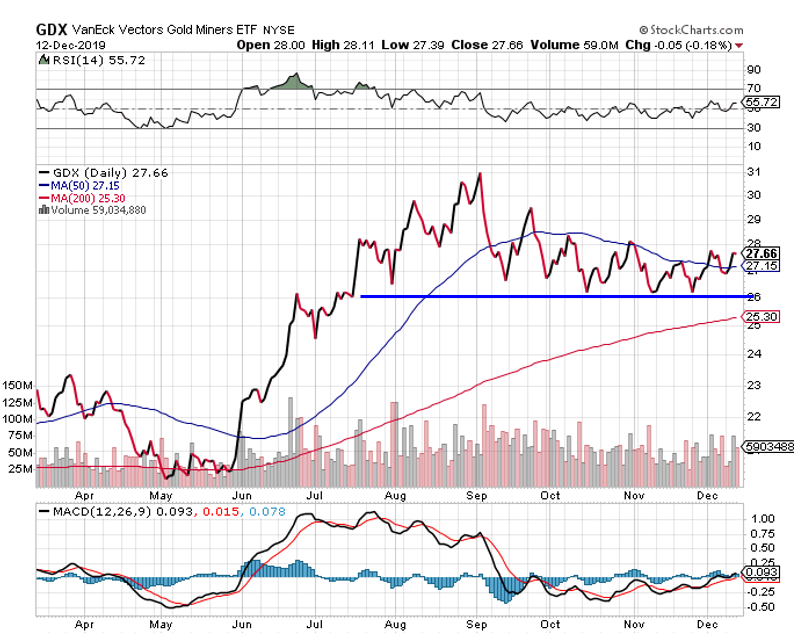 That could be signalling more strength for gold stocks, and even gold itself, as the stocks often lead the metal.

Ideally though, we would see at shakeout first, with gold testing the $1,400-$1,425 range to free the weak hands. And that would set the stage for much higher gold next year.

Consider, though, that smart money gold hedgers are still net short over 300,000 gold futures contracts. Historically, that's a large position, and the odds of a significant gold rally are low until that comes way down. Gold dropping to $1,400-$1,425 might just do it.

Now let's review my gold recommendations. These gold stocks could soar as banks around the world stockpile their gold. Take a look at them before it's too late...

Gold Stocks to Buy While There Is Still Time