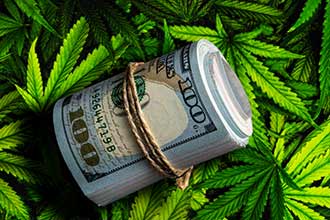 The U.S. federal legalization of marijuana is more promising now than it ever has been. At least 10 states have it on their 2020 ballots, while there are several bills pending on the federal level.

This is excellent news for U.S. cannabis stocks.

You see, the U.S. House of Representatives Judiciary Committee approved a bill in late-November 2019 that, if passed, would remove cannabis as a Schedule I substance under the Controlled Substances Act.

Now, the bill is headed to the full House of Representatives.

Beyond that, the bill would enable a 5% sales tax on all marijuana sold. The extra money would then go toward career training and legal assistance for people impacted by the decades-long war on drugs. Some initiatives in the bill would expunge records of those with marijuana-related offenses. While other parts would require government agencies to accept security clearances from cannabis users.

The bill itself is a good thing. And if it passes, it'll have a powerful impact on the industry and those impacted by out-of-date laws.

Truly, this is a big deal for U.S. cannabis stocks as we inch closer to 2020…

Beyond just the MORE Act, other legislations like the SAFE Banking Act, bills for improving veteran access to marijuana, and cannabis research are underway as well.

But the MORE Act is the kind of marijuana legislation people have truly been waiting for.

Now, we're going to make it clear that the MORE Act isn't likely to be the one to legalize marijuana – not in 2020, at least. Money Morning's Director of Cannabis Investing Research Greg Miller says it's unlikely to make it through the Senate. Beyond that, he says it's entirely possible it might not make it through the entire House – even with increased support on marijuana legalization.

Of course, Greg Miller says it would be phenomenal if he was wrong, and the House ultimately votes in favor of the bill. He just thinks there's only a small chance that would happen.

That being said, the MORE Act potentially not becoming a law doesn't take away from its important role on the road to federally legalized cannabis.

The Judiciary Committee voting for the decriminalization of cannabis overall is historic within itself. The vote is a big deal.

Cannabis Continues Its Trek Towards "Normalization"