Over the last 12 months, the price of silver is up a remarkable 16%.

I think 2020 is setting up to be another positive year for this precious metal. Demand for fabrication is robust and is expected to continue growing. Demand from jewelry and silverware also remain strong. And electronics demand for silver continues to climb. 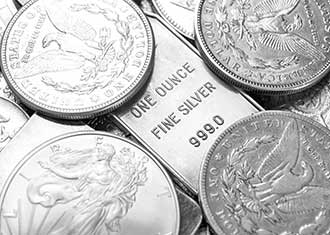 Despite all this, investor enthusiasm is nowhere to be found.

What's more, this is all happening as total silver supply has been in serious decline, along with plunging silver mine grades.

So, silver's fundamental picture looks great heading into 2020. And the reality of silver sentiment being so low means the metal could easily launch a new stealth rally. Assets like silver tend to run up when they're the most ignored.

Here's a look at the details on silver's fundamental and technical setup, and what that means for the price of silver in 2020.

The Outlook Is Bullish for the Price of Silver in 2020

Since 2011, annual silver fabrication demand has been climbing steadily.

While some components like photography continue to drop, others like jewelry, electronics, superconductors, and photovoltaic continue to climb. 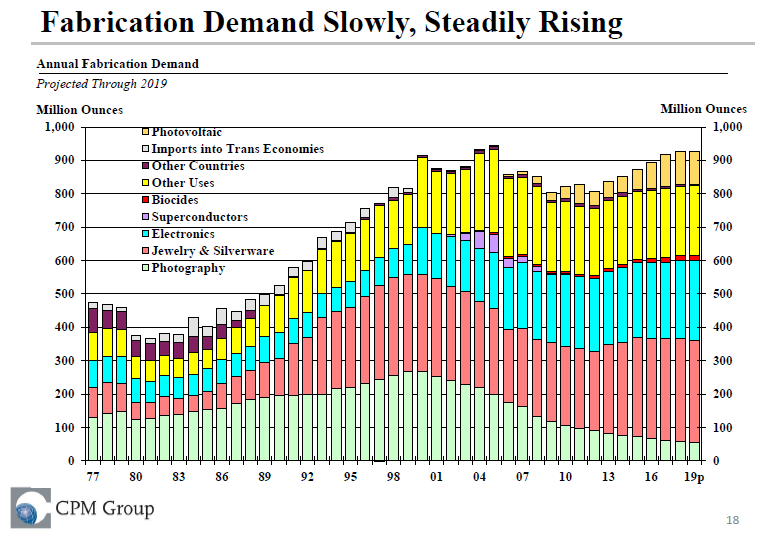 In fact, the fastest-growing component of silver fabrication demand is photovoltaic, which is better known as solar panels.

This next chart looks at photovoltaic alone. And the growth in this trend is striking.

Just 10 years ago, annual silver demand for photovoltaic solar panels was just north of 20 million ounces. By 2017, that had grown nearly fivefold, and this year's projected level is expected to reach the milestone 100-million-ounce level. Silver is a great conductor of both heat and electricity, making it an ideal component in solar panels. 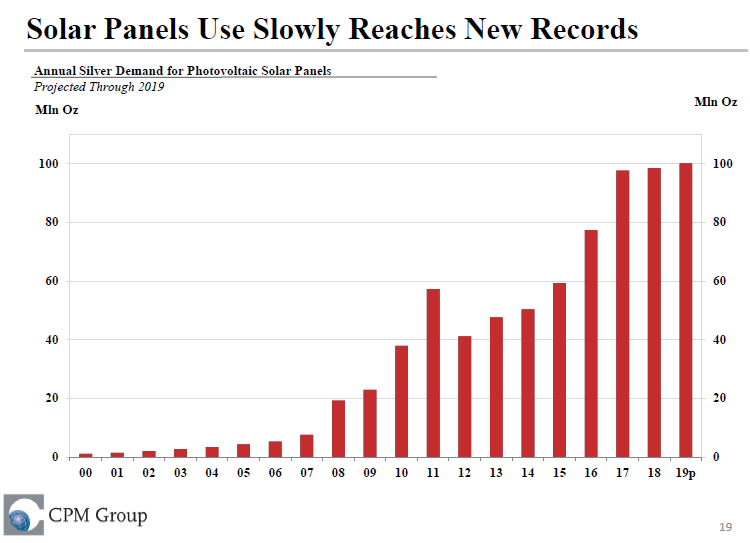 Given the ongoing drop in solar panel production costs, along with rapid growth of green energy production, I expect we'll easily meet that threshold this year. And that's the sort of news that can help drive silver buying.

Electronics demand for silver has also been climbing. The wonder metal is in practically every electronics device out there. 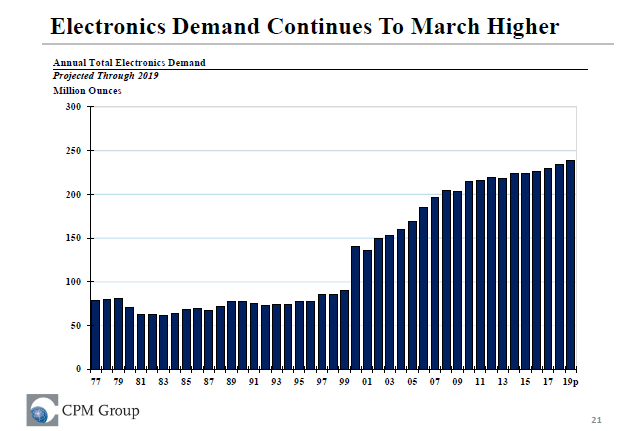 This is the largest share of industrial silver demand, which last year was up 2% year over year to 248.5 million ounces. The CPM Group projects another increase for 2019 once the final numbers are in.

And all of this is happening as total silver supply is coming down. 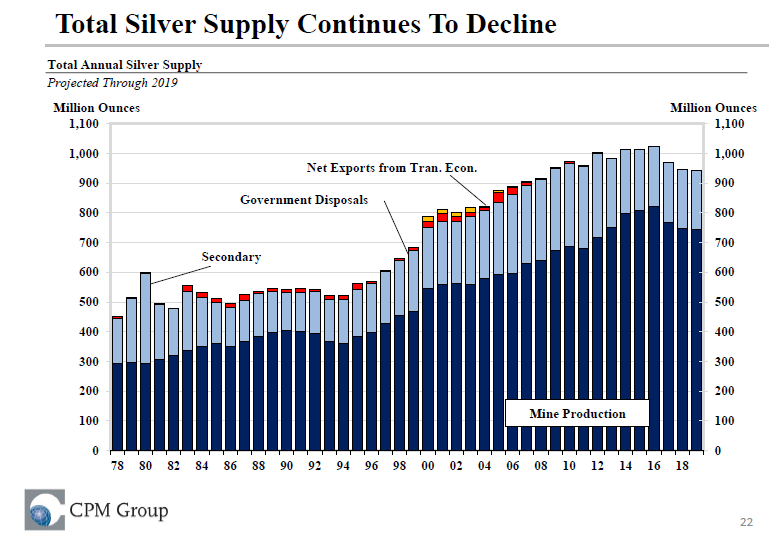 We can see that total supply peaked in 2016 and has fallen since. That drop is mostly thanks to falling mine production. Production from the top five primary silver mines dropped 26% from 100 million ounces in 2014 to 74 million ounces last year.

But the supply side is not only challenged on a total output basis; it's also facing declining ore grades.

Now let's see how the silver price has been behaving. 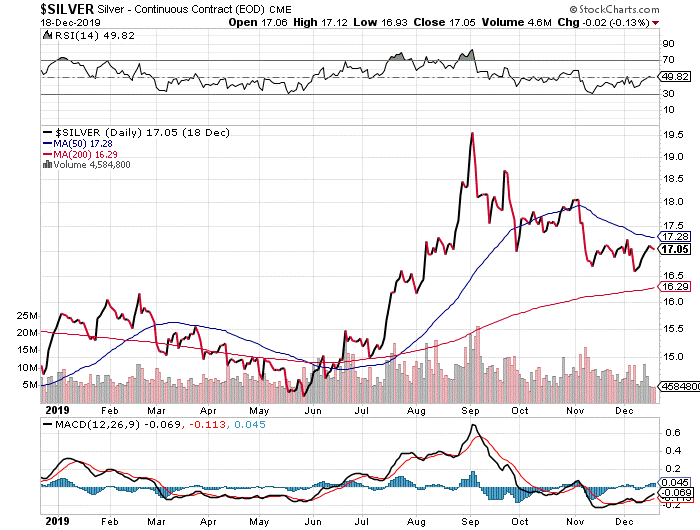 The upside action from late May was tremendous, helping silver prices peak with gold at $19.50 in early September. Since then, silver has given back 13%.

It's been in a steady downward trend, with price action tracing out a falling wedge. While this is a bullish pattern, it could need more time before breaking out. If that happens to the upside on an expansion of volume, then it's more likely to hold.

By comparison, silver stocks have remained robust since also peaking in early September. 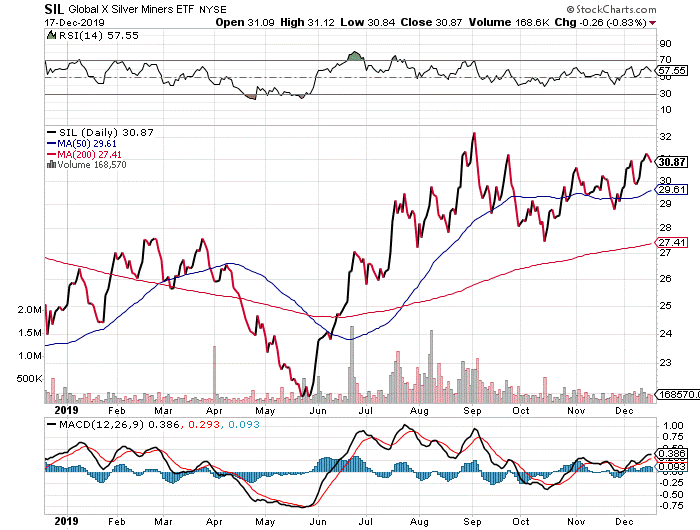 Silver stocks have had a great run since late May, along with silver itself.

But if we step back and look at the past five years, and despite a challenging past three years, SIL's May low was much higher than the early 2016 bottom. What's more, there's been a lot more volume, indicating that interest is starting to build as well. 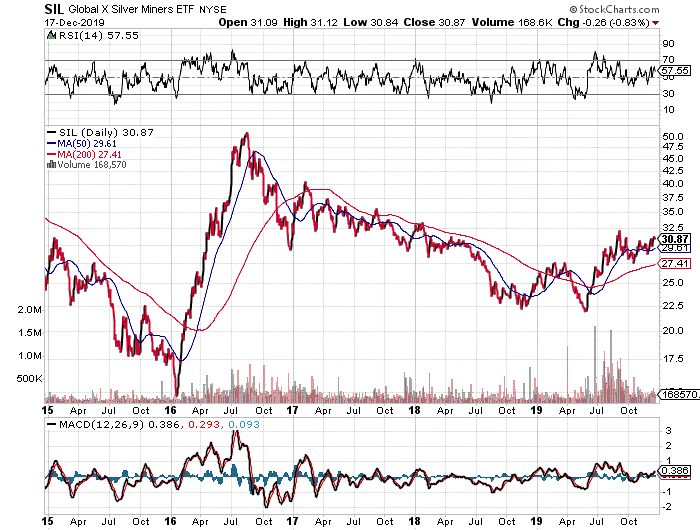 Now that we've seen the technical and fundamental factors impacting the precious metal, here's my official silver price prediction for 2020...

My 2020 Target for the Price of Silver

Dear Mr Krauth, I agree that both Gold and Silver will go higher and higher and I believe. Silver to a $ 25 range. The demand will become so high that a shortage of silver is on the horizon due to climate and consequently energy situation which industry cannot cope with. The corrupt Wallstreet maffia knows that also and you can see from your own graphics how the market is manipulated every day. Of course on the paper future markets. What Goldman Sachs predicts is only in their favor and never an indication for their clients. For me your predictions and explanations I consider correct and in which I believe Finally a Happy abd Successful 2020