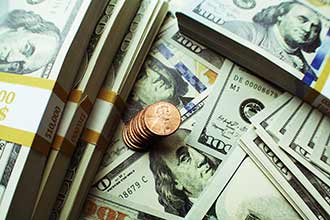 On Wall Street, they call it the "January Effect" when stocks begin to climb at the start of the year. That's because January is historically one of the best months of the year for stocks.

But the top penny stocks are poised to benefit from this most of all.

In fact, our top penny stock right now could gain as much as 218%. We're going to share that penny stock with you in a moment, along with our two other best penny stocks to buy in January 2020.

But first, we're going to show you the extremely basic formula we used to uncover our best January penny stocks, so you can use it too.

There are plenty of stocks in the current market that aren't priced at their true value. Knowing this formula can help you determine the true value and possibly even double your money on penny stocks.

Now, there is no such thing as perfect strategy. But this will at least increase your chances of success investing in penny stocks.

It's as simple as comparing a company's price/earnings (P/E) ratio to its growth rate.

In general, a stock is more likely to increase when the growth rate is higher than the P/E ratio. You can calculate this by making a ratio of P/E to earnings growth, called the price/earnings-to-growth (PEG) ratio.

This ratio expands on the P/E by calculating the expected earnings per share, which can point to the stock's true value. If the price of a penny stock is lower than the earnings growth, it means the stock is undervalued.

This is the simple formula we used to uncover the top penny stocks right now.

Low and negative interest rates around the world have been making gold attractive.

Kinross Gold Corp. (NYSE: KGC) is a Canadian gold company that develops properties worldwide, including locations in the United States, Russia, Chile, Brazil, Mauritania, and Ghana. At the start of this year, it had 53.9 million ounces of silver and 25.5 million ounces of gold in proven reserves.

At the moment, Kinross is trading at just 14 times earnings. Analysts anticipate that the company will increase profits by 26% in just the next year. But this profit potential will only expand as things become more volatile in the global markets.

The stock is already rallying, with an increase in the share price of 24% over the past six months.

But it's no match for this next top penny stock. Here's one that could gain 170%…

Callon is trading at just five times earnings right now, and it is positioned to grow profits by 50%.

Similar to gold, oil prices are poised to skyrocket in the coming year thanks to easy monetary policies. In the last half of 2019, they've already gone up.

In fact, at some point in the near term, $100 per barrel is a distinct possibility.

When this happens, Callon is going to trade in the double digits, which is over twice its current share price. It could happen quickly. The stock is above $4 now, but analysts give it a high target of $13 – that's a gain of 170%.

And that brings us to a penny stock with even more profit potential. This one is poised for a 218% gain…