Today, we're going to dispel some massive misconceptions about angel investing. But we're also going to show you how you can generate life-changing wealth by investing in startup companies with this simple guide.

Angel investing is still overlooked in favor of traditional routes to generating wealth. For a long time, many thought only millionaires or tech geniuses in Silicon Valley could access it. 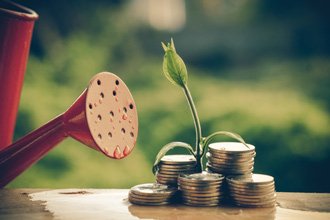 Today, that's no longer the case. The Jumpstart Our Business Startups (JOBS) Act of 2012 made it so that virtually anyone could become a startup investor. Now, a small investment of $50 can get you started angel investing.

Even small investments can mean huge profit potential. For example, before Amazon.com Inc. (NASDAQ: AMZN) was an online retail hub, it was an online bookseller. Founder Jeff Bezos had received $50,000 each from a group of startup investors to help fund growth.

We know what you're thinking. $50,000 is no small investment. But it's small compared to the return. That money grew to $8.5 billion over the following 25 years. That's 17 million percent growth.

This kind of growth is still possible in startup investing. The only difference is that you don't need $50,000. If you choose the right startup, a small investment of $50 could produce high percentage gains and build the kind of wealth that lasts generations.

Here is what you need to know about angel investing and how to start profiting from ground floor companies.

Investing in Startup Companies as an Angel Investor

Angel investing is derived from the arts world. Its meaning comes from the practice of a wealthy benefactor underwriting or donating to keep a theater production going.

The term took on a broader meaning when it was applied to the financial sector. At first, angel investors were people who invested in very early-stage tech companies before they went public.

This is still true, but angel investors don't invest in just tech companies. Their reach expands across a variety of industries.

Angel investors are also not the same thing as venture capitalists.

Angel investors will put money into a company when it is valued at $5 million or less, on average. In exchange, they'll get to own a stake in the company before it is publicly-traded.

A venture capitalist might step in when a company has a higher valuation, and these are often investment firms. In contrast, angel investors often work alone, which allows them to pick and choose the investments that are most compelling.

Kutcher caught the investing bug after he discovered that rapper Curtis "50 Cent" Jackson had agreed to an endorsement deal in exchange for a stake in the company.

From that point forward, he began looking at more equity-based investments, which led him to invest in startups. Some of his early-stage investments include Skype, Uber Technologies Inc. (NYSE: UBER), and Spotify Technology S.A. (NYSE: SPOT).

Kutcher's net worth soared after he began investing in startups, and this is something that is possible for just about anyone.

How Does the Math Work for Angel Investors?

Angel investing isn't without risk, but the rewards for a successful investment can be astronomical.

Because there is risk involved, it makes sense to limit your exposure by using something like the 50-40-10 model, which would allocate 10% of your overall portfolio to speculative investments.

The math is a bit different with angel investing. You see, instead of looking for an average return between 10% and 20% annually on your investments, you need just one or two of your picks to succeed for your strategy to be worthwhile.

In fact, one of those could be the next Amazon or Airbnb, turning your $50 startup investment into millions in life-changing wealth. You just need to know where to put your money.

One hint at whether a startup investment is positive could be share dilution.

There's a scene in the movie "The Social Network" about the growth of Facebook Inc. (NASDAQ: FB). The company's co-founder learns that his shares were "diluted," meaning his ownership stake reduced significantly.

This sounds ominous if you're an equity investor, but the reality is much different.

Let's assume you invest enough that you own a 25% stake in a startup. But someone else comes along and triples your investment, dropping your stake to 10%.

This sounds terrible, but there's a bright side. Before that new investment, your startup may have been dead in the water, so you owned 25% of something that wasn't worth much. The new investor might be able to jumpstart growth, and now you'll own 10% of a potential billion company a few years down the road.

If many investors are on board with the startup, it could have something going for it. Of course, that's not the only thing. And it's not the last thing.

Along with knowing which companies are promising, you should also know when and how to secure your gains.

Making Sure to Bank Your Profits

An angel investment isn't worth much if it's only on paper. You'll need some way to get those profits into your bank account so that you can enjoy your financial success or begin funneling some of that cash into your next startup pick.

There are several ways to accomplish this.

The first is with an IPO, which is a common exit point for angel investors.

When the IPO hits, you'll have a chance to bank some of your profits. If this is a company that you believe will be around for the long haul, you may wish to hold onto some shares to continue building wealth on the way up.

The other possible exit point is an acquisition. It happens daily where a large conglomerate snaps up a smaller company for billions to either erase the competition or expand its services.

When one of these buyouts happen, you can take your profits and walk.

As you look at startup companies for potential investments, be sure to consider your exit strategy.

Now you'll just have to decide which startup companies are the best picks. Fortunately, you can get some help with that.