This week marked the launch of legal cannabis sales in the sixth largest state: Illinois. And to call it a success is an understatement.

I'll get to all the juicy details in a bit. But it's a great sign for the 10 states poised to legalize cannabis in 2020. I'm going to show you how to profit from the booming medicinal and recreational cannabis industries there too.

Plus, we're going to talk about the possible fallout from anti-vaping legislation - and what you can do about it.

But first things first, Illinois expects thousands of marijuana convictions to be expunged...

Illinois Cannabis Is Open for Business 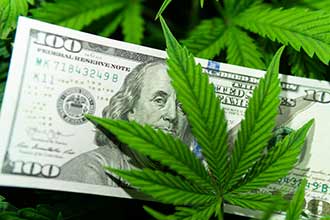 At least 43 stores around the state received approval, but six remained unable to open for business due to permitting, construction, and other challenges. The Chicago Tribune reported that people were waiting up to three hours to enter the Mission Dispensary.

This was not just an important day for cannabis proponents. It is viewed as a major legislative win for criminal justice reform advocates. On Wednesday, Illinois Lieutenant Governor Juliana Stratton praised the policy change, as it will also allow for the expungement of some convictions related to cannabis. The Associated Press reports that Illinois Governor J.B. Pritzker granted more than 11,000 pardons for low-level marijuana convictions. Thousands more are expected in the year ahead.

Illinois legalized cannabis for adult cultivation and sales in May 2019. Marijuana Business Daily has estimated that the Illinois recreational market might eventually reach $2.5 billion per year in revenue.

Illinois was the 11th state to legalize marijuana. But a wave of other states will follow in 2020...

Which State Will Legalize Recreational Cannabis Next?

2019 was a big year for cannabis proponents. Illinois' legalization is complete. The U.S. House of Representatives passed a significant marijuana banking bill. And a massive reform bill passed through a House committee for the first time.

Even though two-thirds of Americans support the legalization of cannabis, it remains unlikely that removal of cannabis from Schedule I will happen this year. This puts the focus back on states to set their own rules.

Right now, five states are jockeying to become the next safe-haven for cannabis commerce: New Jersey, New Mexico, New York, Arizona, and Florida. These locations either have ballot initiatives set for this year or campaigns pushing for their addition to the 2020 state ballots.

But today, one other state finds itself in an odd situation...

Vermont has legalized the growth and possession of recreational marijuana. It did so back in 2018. However, it is still illegal to buy or sell cannabis - meaning there isn't any non-"black market" marijuana commerce in the state.

In 2020, however, things could change. The state Senate has already approved a bill that would legalize marijuana sales and oversee the taxation of marijuana. The state House will take the bill back up in 2020. Many local officials have made retail regulation of the cannabis sector a priority. The bill's passage would provide another boost to cannabis investors due to the opening of yet another retail market.

Finally, here's why "vaping" is not the scandal you think it is...

The FDA Rules on Vaping