Recently, American moving and relocation company United Van Lines released its annual "Movers Study." The research outlines the state-to-state movement of its customers to get a better understanding of migration patterns across the United States.

This year, the state with the largest percentage of inbound migration to a state was surprising. 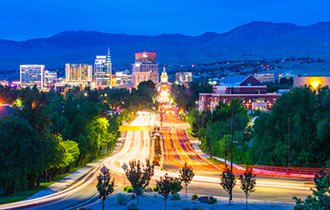 After all, this state has the 11th smallest population in the United States, and it's not exactly known as a hub for technology startups or manufacturing.

Idaho saw 67.4% of state-to-state customer relocations using United Van Lines as inbound migrations. Given the proximity to California, Idaho has found itself as a desirable, less expensive destination with lower taxes and housing prices.

Investors looking to take advantage of the growing population might want to consider getting in on one real estate investment trust (REIT) that is tapping into other high-growth cities like Boise - the capital of the state.

I'm talking about other cities that saw similar swells of movers packing up and leaving high-tax states and turning to "secondary" markets with a more affordable lifestyle.

Let's dig into this opportunity - with a top REIT that has a 7% dividend and steep upside over the next 12 to 15 months.

High Growth in the City

Population growth in Idaho is booming. It was the first time in more than 25 years that Idaho led the survey results. But anyone paying attention wouldn't be surprised by the development.

The state has seen its population grow by nearly 14% since 2010, ranking seventh in growth rate out of the 50 states and the District of Columbia. Its capital, Boise, has grown by a staggering 18.5% since 2010, boosting property values, rents, and job demand in the process.

The only states outpacing Idaho are other popular, high-growth cities where millennials are flocking to. They include Salt Lake City, Dallas, Orlando, Tampa, Florida, Denver, Las Vegas, and the District of Columbia.

With this significant population shift and growth for real estate demand, investors have a rare opportunity to tap into this demographic shift while capturing a solid dividend in the process.