Uncertainty is one of the biggest portfolio risks you'll face as an investor, and there's no bigger cause of uncertainty than a war.

It's no surprise Wall Street is paying as much attention to the brewing conflict between the United States and Iran as anyone besides the soldiers involved. 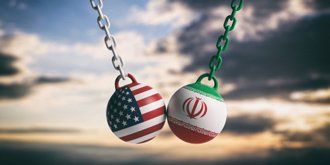 But things could get much worse if this isn't the end of the conflict and just the beginning.

Because we don't want our readers to be caught by surprise, we want to talk about the worst-case scenario for your money: a stock market crash in 2020.

It's not the most likely scenario, but it's one you absolutely need to plan for, especially if the conflict with Iran escalates...

How War with Iran Could Lead to a 2020 Market Crash

For now, it appears cooler heads are prevailing in both Washington and Tehran. Both sides can save face and claim victory. The United States can claim they took out a powerful general who was a sowing anti-American chaos in the region. Iran can claim they retaliated with targeted missile attacks on U.S. bases.

That might let the conflict lapse. It might also be the first blows in a full-on war between the United States and Iran...

After Soleimani was killed, Iran said it would no longer adhere to the 2015 anti-nuclear agreement it negotiated with the United States. It will start enriching uranium again immediately.

Experts predict it could take Iran just a year to build a nuclear bomb.

That makes it more likely the United States will attack Iranian nuclear facilities within the next few months. If that happens, Iran could continue retaliating against American troops in the Middle East, ratcheting up a back-and-forth that could lead to an all-out war.

Rest assured, that would be very bad for stocks.

Our closest comparison would be the Sept. 11, 2001, attacks, when the stock market plunged 7.1% in one day, its biggest single-day point loss ever. The Dow ended that week down 14% and was still in correction territory a year later.

We can go even further back too, to another crisis in the Middle East that started a war. The Dow dropped more than 13% between Iraq's invasion of Kuwait in 1990 and the beginning of U.S. military campaign.

With stocks near all-time highs and the bull market nearly 11 years old, stocks could fall even more drastically if a war breaks out Middle East this time.

Even if this is the worst-case scenario, it makes sense to add some protection to your portfolio before it's too late.

And this is one of the best ways to do it...