Some form of cannabis use has already been legalized in 33 states and the District of Columbia. That includes 11 states that have fully legalized recreational marijuana.

And the next wave of legalization is just months away. During the 2020 election, marijuana reform should be on the ballot in another 10 states.

Make no mistake: This is by far the biggest catalyst for cannabis stocks we've ever seen.

According to research by the National Institute of Cannabis Investors, the legal marijuana market was valued at $10.8 billion in 2019. And they believe full cannabis legalization in the United States could cause the market to jump to $300 billion in value.

That's why the 10 states voting on marijuana legalization in 2020 are so important to marijuana stocks. 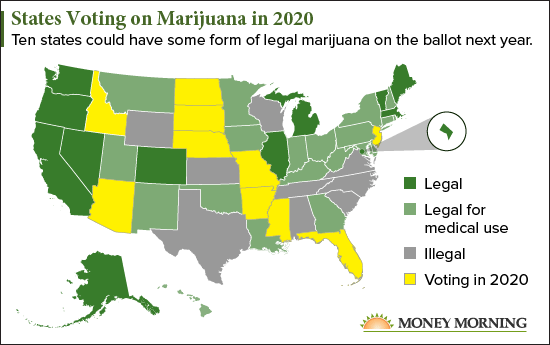 And while every state that passes marijuana reform will be a boost to cannabis stocks, one state in particular could have a massive impact on the sector.

Marijuana Stocks Could Soar if This State Legalizes Cannabis in 2020