I've been writing about 5G high-speed cellular networks for more than five years now, and I couldn't be more excited about what we can expect throughout 2020.

Sure, 2019 saw a fair amount of progress in rolling out this advanced new platform. The next-gen mobile network is available in a few markets. 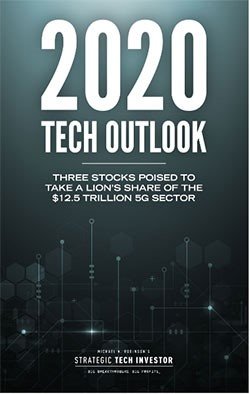 But we have a big catalyst coming in fall 2020.

That's when Apple Inc. (NASDAQ: AAPL) unveils a new 5G-native iPhone. But don't underestimate the importance of this move. Sure, it might sound like just another iPhone, but the implications are huge.

You see, Apple sets the standard for the rest of the sector, and this move could unleash millions - even billions - in new wealth for investors that latch on now.

5G will be important for the entire tech ecosystem in the year ahead, and it's just one major catalyst that investors should be tracking - because of all the new wealth it's creating in hundreds of different sectors.

But I have my sight set on three that could turn out to be the most profitable.

There are key developments with chip stocks, beaten-down software, and cloud players that, if you find the right companies, can show you huge returns ahead.

That's why, right now, I'm going to show you how you can profit from all three of these exciting growth sectors in the upcoming year...

Tech Will Continue Paving the Path to Wealth in 2020

As a longtime Silicon Valley insider, I can tell you unequivocally that tech will continue to be a big profit driver all year long. Not just for the market after a blazing 2019, but literally for every single sector out there.

We're living in what I call the "convergence economy." Never before in the history of the world have so many tech platforms zoomed ahead - all at the same time.

In our new, interconnected world, it's almost impossible to separate out the mobile wave from fintech, chips, software, AI, and the cloud. Each one drives the other forward so that tech investors have a target-rich opportunity.

As you might imagine, 5G sits right in the heart of it all.

I predicted to readers of my Nova-X Report newsletter way back in May 2014 that 5G would be a game changer. The new standard is more than just blazing fast - it's 100 times faster than the current 4G platform. 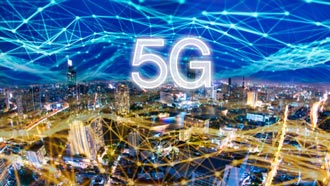 It's the linchpin for such factors as smart cities, the Internet of Things (IoT), driverless cars, and a sensor- and software-laden global supply chain. We're also talking about remote patient monitoring that lowers healthcare costs and enables long-distance robotic surgery.

It's no wonder then that 5G will have a huge financial impact. It will force a massive upgrade cycle for handsets, laptops, modems, and antennas, just to name a few.

MarketsandMarkets says firms will be spending $33.72 billion per year on 5G by 2026. And that may be conservative. Another prediction by Research and Markets pegs the 5G sector at $251 billion by 2025.

I believe both of those are way too cautious...

The actual global economic impact could be as high as $12 trillion a decade out as the entire world adopts 5G technology.

Even with a 5G iPhone likely not debuting until the fall, other handset makers and all the wireless carriers are adopting the technology literally as we speak.

In a case like this, I believe it pays to look for a great backend play - a company that stands to gain from the entire buildout.

Three 5G Stocks to Get Ahead of All the Upside

keep me informed on 5G
the math is complicated.