After peaking in March of 2019, shares of Boeing Co. (NYSE: BA) have had a rocky year with shares ultimately dropping 23%.

That drop has investors wondering if this is an opportunity to buy into the biggest stock on the Dow. We think it's too early to say, but that shouldn't stop you from making money from the stock.

We'll show you what our research says about the stock, including a chart you don't want to miss. It'll show you exactly when shares of Boeing are going to be bought and sold.

What's Going on with Boeing Stock

After a pair of deadly accidents, the entire world has grounded the 737-Max jet made by Boeing. Airlines relying on this airplane were forced to substitute different planes on many routes.

What was supposed to be the company's flagship model turned into its worst nightmare. The plane has been grounded since March 2019. From cancelled orders to legal issues, Boeing's bottom line took an epic hit.

And that opened the door for the competition to steal away customers, which could have an impact lasting for years.

Boeing stock is already down more than 26% from its March 2019 peak price of $446.01. For a company that size, billions in value just evaporated into the ether. The question is whether the worst it is over for the stock or if it will continue to slide.

But if you are just interested in making money, Money Morning Millionaire Trader Andrew Keene says it doesn't matter.

Despite all the negative news, Boeing stock has traded in a range between $300 and $380 per share for much of the last year. Using an average price of $340, that's about an 11% deviation from the mean.

In other words, is still fairly stable. And predictable.

Traders can take advantage of a stock that has an identifiable pattern by buying when the stock is "oversold" and selling when it's "overbought."

Don't let the jargon fool you. If a stock is in a reliable range, we can make money on it when it goes up and when it goes down.

Andrew gauges these overbought and oversold levels using a technical indicator called the relative strength index (RSI). When the RSI is high, it's time to sell, and when it's low, it's time to buy.

Boeing stock is a perfect example of this.

Take a look at the chart below. When Boeing's RSI hits 70, the stock plunges. When its RSI falls to 30, traders start buying. 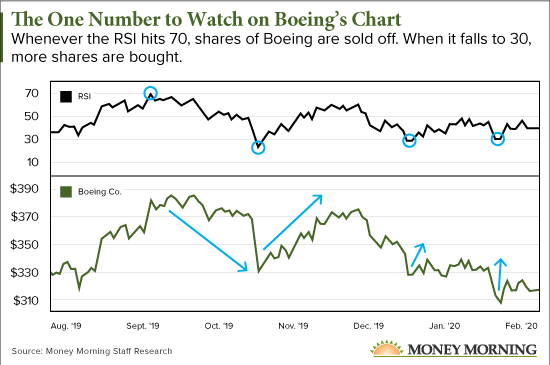 You can wait until Boeing is oversold, when the RSI hits 30, to buy shares of stock and sell when they become overbought, when it hits 70. Or, if you are even savvier, you can sell shares short at the top and buy them back at the bottom.

However, short selling is not for everybody. And you really can't make big money just trading in one direction.

How to Profit from Boeing Stock