Right now, 33 states have some sort of marijuana legalization in effect.

That could balloon to 37 by the end of 2020, when four states vote on marijuana reform for the first time. Another five states that already legalized cannabis for medical use are now pushing for recreational legalization as well.

Make no mistake: 2020 is a massive year for marijuana investors.

According to the National Institute for Cannabis Investors, legal marijuana sales totaled $10.8 billion in 2018. In the next nine years, it's estimated the market could hit a whopping $2.6 trillion in annual sales. That's industry growth of 23,974% in just over 10 years.

With each state that passes marijuana reform in 2020, cannabis stocks get a bullish signal.

But before we look at the states voting this year, here are the states with marijuana legalization already...

There are numerous distinctions between what constitutes cannabis "legality" in the United States.

For instance, CBD use is legal federally. "CBD" is an abbreviation for cannabidiol. It's derived from hemp, but does not have the psychoactive elements (THC) of marijuana that make users "high." Across the United States, it is legal to purchase CBD as long as it has less than 0.3% THC.

Today, we're focusing only on states that have legalized marijuana containing THC. 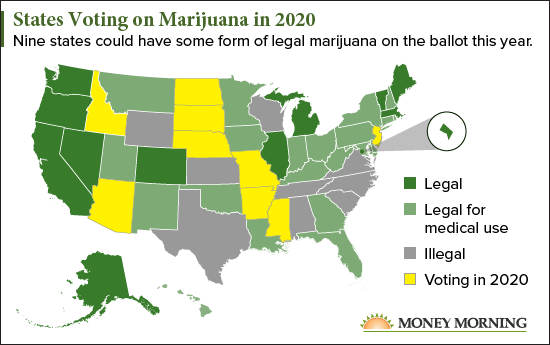 Here are all of the states where medical marijuana is legal:

Here are the states where recreational marijuana is legal:

As the map above indicates, nine states will have marijuana reform on the ballot in November 2020.

And while each state will be a boon for the cannabis industry, one in particular has the potential to send cannabis stocks soaring after the vote...

This State Could Send Marijuana Stocks Through the Roof