One of our top penny stocks right now could be the next Tesla Inc. (NASDAQ: TSLA). And it's the perfect time for you to pick it up.

It could actually be an even better opportunity than Tesla, too.

Tesla surged to a record high $961 this week. Then, after a parabolic rise, shares fell back to earth. People who speculated and bought shares around $900 have seen their investments pull back more than 15%. 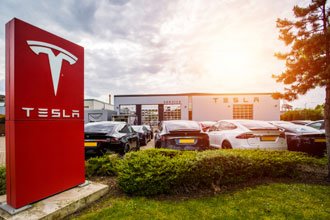 Others still believe the company has yet to hit its peak.

But the truth is Tesla is a $750 stock with an uncertain future. With all its ups and downs, it might not be worth your attention right now.

Instead, you could grab shares of another stock trading under $5 with immediate profit potential instead.

You see, penny stocks offer immense upside due to their cutting-edge technologies or potential cures for rare diseases. And today, we're not just going to show you one - we have three penny stocks to watch right now.

This first one is a winner in a bustling telecomm industry...

It has seen shares pull back sharply over concerns about a potential merger with T-Mobile US Inc. (NYSE: TMUS). While many analysts expect that the deal will happen, there are plenty of reasons to suggest that regulators could turn it down.

For example, consolidation in the mobile space will likely lead to higher prices - not lower ones, as the companies suggest.

Sprint is currently trading well below its rivals. The stock is trading at a price-to-sales level under 0.6, and it's currently trading below book value. That latter figure is important because you could effectively liquidate the company, and the stock would be worth more than it is today.

The book value is $6.26 (from a quarterly measure). Shares trade at $4.71 per share, putting it firmly in penny stock territory. If the stock can get back to par, the stock has an upside of 32%.

But you can nab a quick 50% profit with this next stock this year...

It has been a challenging 12 months for GoPro Inc. (NASDAQ: GPRO), a tech company best known for its cameras, mobile apps, and video software. Shares are off 48% from their 52-week high, and investors are turning away after another weak earnings report showed weakness in revenue.

The company lacks a competitive moat. Barriers to entry in the camera space are low. And it will always be looking over its shoulder from larger rivals.

That said, the company has seen four years of improvement in its profitability. The firm also benefits from a higher-level clientele that will pay for quality and subscriptions.

GoPro has the potential to rebound after yesterday's weak results. And it's certainly a takeover target for a major software company like Microsoft Corp. (NASDAQ: MSFT) or a tech giant like Apple Inc. (NASDAQ: AAPL).

Shares of GoPro trade at $3.94 per share. But we see a price target of $6 by the end of the year. That would represent a more than 50% gain over the next 10 months.

But this penny stock has far more upside potential - because it's tapping into the trend of the decade...

The Best Penny Stock to Buy